Mark Klang was lounging on the couch at a friend's house watching the NBA Draft lottery when he realized his fortunes as a Cleveland Cavaliers ticket broker were about to take a turn for the best. 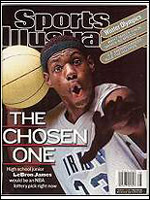 As luck would have it, the Cavaliers were awarded the No. 1 pick in the draft and the team surely was going to take LeBron James, the hometown hero and then-18-year-old basketball phenom. James already had gained a national following, his every move both on and off the court the focus of intense scrutiny. And that was before the marketing machines of the NBA, Cavaliers and Nike had begun to churn.

He was crowned the heir apparent to the NBA kingdom that was in want for a new king. Gone was Michael Jordan, who took the NBA and Nike to extraordinary heights. James, if hype were somehow predestiny, would take things to an even greater level.

Somehow, James seems to have lived up to his enormous billing. The NBA, indeed, became King James' playground.

Proving he was every bit as capable as Jordan both on the court and off, he averaged more than 20 points, five rebounds and five assists as a rookie, and began to give Nike a return on its seven-year, $90 million investment in him as the centerpiece of the shoe giant's new generation of endorsers.

Everything even remotely connected to James seemed to turn to gold, as even Klang can attest.

"It changed revenue streams by millions of dollars," said Klang, owner of Amazing Tickets, one of the largest ticket brokers in the Cleveland area. "Last year, you couldn't give tickets away for many games."

The demand to see James enabled Klang to sell thousands of tickets this season. With James on the court, the Cavs more than doubled their victory total, their 35 victories up from from a league-low 16 a season ago. Attendance skyrocketed as well, as an average of 18,288 packed into the Gund Arena to see their hometown hero -- nearly 7,000 more fans per game than the season before. The Cavs' 59 percent season-to-season attendance increase is the largest in NBA history for a team that did not change venues.

Klang, who acted quickly to secure LeBronMania.com as a domain to sell tickets, said he sold 650 tickets to both the Cavaliers' home opener against the Nuggets and the lone game at Gund Arena against the Los Angeles Lakers. That's at prices that were, at times, marked up as much as eight times their face value -- $10 seats went for $50, $36 seats were sold for $100 and $235 seats for the most coveted games reached $2,000 apiece.

Of course, one of the biggest beneficiaries of the LeBron economy were the Cavaliers, who thanks to the NBA's rookie salary scale are paying James a combined $12.96 million for his first three seasons. Assuming an average ticket of $38.52 last season and $40.15 this season, numbers compiled by the publication Team Marketing Report in their "Fan Cost Index," the Cavaliers grossed an additional $12 million in ticket sales this season alone, up to $30.1 million from $18.1 million last season.

The team sold out 16 games in total, the third highest amount in franchise history. Nine of the team's final 11 games were sellouts, including Monday night's game against the Milwaukee Bucks, when the Cavaliers were competing against the Cleveland Indians' home opener.

"To sell out that game made it feel as if we were embarking on a championship run," Cavaliers president Len Komoroski said.

The Cavaliers figure to cash in even more next year if LeBron and the team continue to be a draw. Before the end of the season, they announced a raise of single-game ticket prices from $1 to $10 each for the 2004-05 season.

Aside from the projected $12 million gross revenue bump in ticket sales, James' presence this year was worth at least an additional $18 million more in other revenues, estimates sports business analyst Hadrian Shaw, author of "Shaw's Pro Basketball Blue Book."

"People have been (taking advantage of me) since my sophomore year in high school," said James, who as a high school senior had two of his games televised on ESPN networks.

Cavaliers officials have not publicly commented on any of the team's financial gains this season. But the numbers don't lie.

Radio listenership more than doubled, local television ratings increased by 300 percent and, thanks to James' best-selling jersey, the Cavaliers ranked fourth overall in the league in apparel sales, according to the NBA. Approximately $72 million dollars worth -- or 1.6 million jerseys -- featuring James' name and No. 23 have been sold since they first went on sale on June 26, according to Neil Schwartz, director of marketing for SportsScanINFO, a sports retail tracking firm.

"By land, by sea or by air, people have expressed their interest in our team," Komoroski said. "We've reached unprecedented levels in every area."

While James figures to pick up close to $30 million this year, including his $10 million signing bonus from Nike, it is unlikely that his primary business partners, Nike and Coca-Cola, will see a dollar-for-dollar return on their investment this year. But they are in it for the long-term.

This year, Nike used James in only two commercials, sold a couple hundred thousand of James' Air Zoom Generations and rolled out "LBJ"-branded apparel and even a watch.

Coca-Cola -- which signed James to a six-year deal worth approximately $2 million per year -- unveiled two Sprite commercials with James, one with a new character called Miles Thirst, and put the 19-year-old in a Powerade commercial in which he swishes consecutive full court shots. The only James-branded product Coca-Cola unveiled was a limited edition shrink wrap around a 1-liter bottle of Sprite sold only in the Cleveland areas.

In the Sprite ads, James is positioned to pitch the drink as a lifestyle brand off-the-court, while Powerade is clearly the beverage meant to correlate with performance.

Perez said that one of the reasons James will be so valuable to the company in the future is because of his often underestimated off-the-court savvy.

"I always had a hunch that he was going to do great commercial work," Perez said. "He really knows how to play things up and has this charming appeal and charisma that makes it possible for him to one day perhaps transcend the sport of basketball."

When asked what makes him a good endorser, James replied, "I've got a great smile," and then proceeded to show his pearly whites.

Perez said that James also pays attention to details. Although the Cavaliers are sponsored by Powerade's competitor Gatorade, James has used a clear water bottle and has sparingly used towels with the Gatorade logo on them for most of the season so as not to be seen or photographed drinking with Gatorade cups or towels.

When asked by a reporter on Wednesday night what James thought of 14-year-old Freddy Adu playing as a professional in Major League Soccer, James reply was what you might expect from a NASCAR driver talking about a driver who runs on a similar engine.

"I'm happy for Freddy Adu," James said. "He's a Nike person, so I'm very happy that we were able to capture him."

One of James' most active sponsors has been Upper Deck, which has featured him or Michael Jordan on the cover of every basketball box produced this season. The company has sold plenty of autographed items from basketballs to his St. Vincent-St. Mary high school jersey, and two sets debuted that featured cards of only James.

"His items fly off the shelves," said Keith Lauer, product manager for Upper Deck collectibles. "Whatever we can make moves. I think you can compare this phenomenon to Jordan in that he's transcended the sport like a pop culture icon."

Something must be working.

Goodwin Sports Management, which represents James, is getting so many calls from companies pitching their products or entertainment ideas that brothers Aaron and Eric Goodwin don't even see or hear about some ideas unless they pass a stringent viability test.

The economic impact of James is hard to miss. Enough James jerseys have been sold to outfit 76 capacity crowds at Gund Arena or 55 percent of the greater Cleveland area.

On a smaller scale, "The LeBron Effect" can be observed at the businesses around the arena.

James' rise in the NBA meant 40 to 70 more rooms were filled on game nights at the Radisson Hotel across from the arena. That's gross revenue of approximately $300,000, according to Vern Fuller, the president of the hotel's ownership group who played with the Indians from 1964-1970.

"LeBron has pumped new life into this economy," said Geoff Rose, director of operations for The Winking Lizard Tavern, a bar located a few doors down from the hotel. "There's a lot more foot traffic and a lot more energy from this community and the people that now come in from out of town."