MINNEAPOLIS -- The Kid is all grown up, and he has an NBA
MVP award to prove it.

Kevin Garnett got 120 of 123 first-place votes to beat two-time
winner Tim Duncan for the honor Monday, three days after his
Minnesota Timberwolves won a playoff series for the first time.

Garnett's teammates attended a packed news conference at the
Timberwolves' arena, and he praised them repeatedly.

"I wouldn't be nothing without those knuckleheads, believe
me," Garnett said. "It's a team game, and I've always kept that
perspective."

He has played at an MVP level for years, but this was a
breakthrough season for the Wolves. They earned the top seeding in
the Western Conference playoffs with a franchise-best 58-24 record,
then ended a string of seven straight first-round exits from the
postseason by beating the Denver Nuggets.

"This is best situation I could ever think of, or dream of,"
Garnett said.

Playing everywhere from center to point guard, the 7-footer
averaged 24.2 points, a league-leading 13.9 rebounds and 5.0
assists this season -- and his playoff stats are even better.

Garnett joined Larry Bird as the only players to average 20
points, 10 rebounds and five assists for five consecutive years.

He received 1,219 points in voting by sports writers and
broadcasters in each of the league's cities. San Antonio's Duncan
was next with 716 points, and Indiana's Jermaine O'Neal finished
third with 523. Peja Stojakovic and Kobe Bryant were next.

"He's definitely deserving of it," said O'Neal, like Garnett a
high school standout in South Carolina. "He waited his turn. A lot
of people thought he should've won it last year." 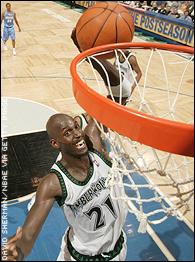 Garnett was taken by Minnesota with the fifth pick in the 1995
draft out of Chicago's Farragut Academy, where he spent his senior
year. Bryant also went straight from high school to the pros the
next season, and now dozens of teenagers skip college each year in
hopes of making it in the NBA.

Nicknamed "The Kid," Garnett made the All-Star team in his
second season, and his success helped fuel the wave of
preps-to-pros players.

"When he came into the league nine years ago, the No. 1 thing
he said to myself and Kevin McHale is he wanted to be the best
player in the league," Timberwolves coach Flip Saunders said.

Saunders and McHale, the former Boston Celtics star who is
Minnesota's general manger, recalled watching Garnett work out in a
steamy Chicago gym shortly before the draft.

Before the Wolves' brass showed up, they were hoping one of the
four teams picking ahead of them would grab Garnett -- allowing Joe
Smith, Antonio McDyess, Jerry Stackhouse or Rasheed Wallace to drop
to them.

They quickly changed their minds.

"We looked at each other and said, 'We better hope he's there
at No. 5,"' Saunders said.

"I told him that I was willing to work and do whatever I had to
do to get there," Garnett said. "There wasn't a day when I wasn't
in there asking 100 questions and he was giving 100 answers. He
worked with me night in and night out."

McHale said: "He reminds me of how basketball should be played,
with passion, hard work and discipline."

The Timberwolves host the Sacramento Kings in Game 1 of their
Western Conference semifinal series Tuesday night, and commissioner
David Stern will be there to present Garnett with his trophy.

It's the first league MVP award for a Minnesota player in the
NBA, NFL, NHL or major leagues since Rod Carew won the 1977
American League honor with the Twins.