SANTA MONICA, Calif. -- North Carolina signee J.R. Smith will not be in Chapel Hill next fall. He announced Thursday he has signed with SFX agent Arn Tellem, making his decision to enter the NBA draft final. 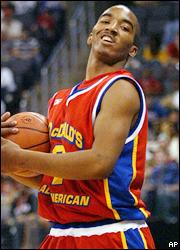 Smith, who averaged nearly 24 points a game at St. Benedict Prep in New Jersey, is projected to be a lottery pick in the June 24 draft. The 6-foot-6 shooting guard is currently working out for NBA teams after declaring for the draft as an underclassman.

"I think I'm ready. I've ready elevated my game to a higher level," Smith told ESPN.com after working out for the Lakers, Nuggets, Jazz and Clippers on Thursday. "The (high school) All-Star games convinced me that I have what it takes to play in the NBA. I got great feedback from the NBA (draft) committee. I was told I could go anywhere (from) No. 1 to No. 16."

Smith improved his NBA stock throughout April's slate of prep showcase games, earning co-MVP honors at the EA Sports Classic with Dwight Howard. He scored 16 points and had four assists in the all-star game. Smith also was the co-MVP of the McDonald's All-American Game after scoring 25 points and hitting five of 10 3-point attempts.

"I have the athleticism and shooting ability that NBA teams look for in a draft pick," said Smith, who went up against college seniors Andre Emmett (Texas Tech) and Brandon Mouton (Texas) in Thursday's workout. "I'm also a great competitor. I think I'll be ready to contribute right away."