OAKLAND, Calif. -- Mike Montgomery admitted to Chris Mullin
right away that he doesn't know all the inner workings of the NBA,
and that honesty impressed Mullin.

Montgomery left Stanford after 18 seasons as head coach to
become the new coach of the Golden State Warriors on Friday. 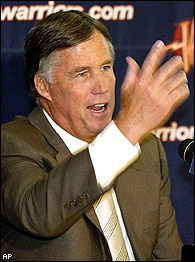 "I guess it never really hit me until they just announced it
that I'm the new head coach of the Golden State Warriors,"
Montgomery said when formally introduced Friday with his wife and
daughter looking on. "I got a little choked up. ... I know this is
not going to be easy. It's going to be a tremendous challenge, but
I'm prepared for that. I think basketball is basketball."

It was the first major hire by Mullin, who became the Warriors
executive vice president of basketball operations a month ago.
Mullin appreciated Montgomery's openness about learning the league.

"This is a huge day for the Warriors. I'm elated this is
happening," Mullin said. "We're thrilled to bring a coach the
caliber of Mike Montgomery into the fold. He's had a tremendous
amount of success throughout his career and we think he'll be a
very good fit for our organization."

The announcement came a day after Mullin announced Rod Higgins
would be the team's new general manager. Mullin met with Montgomery
in person several times for several hours each.

Montgomery told his Stanford players Wednesday he was leaving.

Coaching in the NBA has always been something Montgomery has
considered as the next logical step. For several years now he has
been talking to other coaches about the differences.

"Obviously there will be somewhat of a transition going from
college to the NBA, but I'm prepared to meet those new demands and
am confident in my abilities," Montgomery said.

Montgomery has been one of the most successful college coaches
over the past two decades, but has no NBA experience. He led the
Cardinal to their third No. 1 NCAA tournament seed in five years
this season, but Stanford was upset in the second round by Alabama.

"Coach Montgomery brings great preparation," Mark Madsen, a
former Stanford player now with the Minnesota Timberwolves, said
Thursday. "I don't care what you do. You always want guys who are
going to work hard. No one will outwork coach Montgomery. Coach
Montgomery also brings an ability to communicate with players. ...
Relating to players in the NBA is a very important skill to have
and I think coach Montgomery is going to do a great job."

Stanford has been to the second round of the NCAA tournament for
10 straight years and made the Final Four in 1998. The Cardinal won
their first 26 games this season and finished the regular season
ranked No. 1 with a 29-1 mark. He has a career record of 547-244,
including eight seasons at Montana.

"It was definitely a surprise but I knew it was something that
was going to happen sooner or later," said forward Josh Childress,
the Pac-10 player of the year who declared himself eligible for the
NBA after his junior season with the Cardinal.

"I knew he was going to move up to the NBA ranks. I didn't know
when or where, but this was his chance and he took it. Coach
Montgomery is a great coach. He deserves it. When you have a
winning season like we had last season opportunities open up. He
doesn't have to move, it's right in his backyard, I don't see how
he could have said no."

Musselman, who had one year remaining on a three-year, $4.5
million contract, was 75-89 with Golden State.

Mullin has set up meetings with the assistant coaches, but
wouldn't say whether any would be retained. He said he wants a top
assistant with solid NBA experience.

"Let's be honest, I'm 57 years old. If there was ever going to
be an opportunity better than this, I don't know what it would
be," said Montgomery, who will keep his home in Menlo Park but
also have a place close to Oakland. "This is an easy transition in
so many ways."

One thing he needs: a new car.

"So I don't embarrass the players in the parking lot," he said
with a smile.