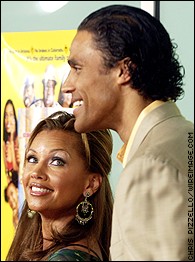 "They are both extremely devoted parents, so the most important thing to them right now is the welfare of their child," Fox spokeswoman Staci Wolfe said. "They are committed to working out what's best for her."

Williams has three children from her first marriage and Fox has a son from a previous relationship. The two had been separated.

Her film credits include 2000's "Shaft," 1997's "Soul Food" and this year's "Johnson Family Vacation." The 41-year-old has also appeared in Broadway musicals including "Into the Woods."

She won the Miss America pageant in 1984, but was forced to resign after nude pictures of her appeared in Penthouse magazine.

Fox and point guard Gary Payton were traded Friday to Boston for Chris Mihm, Chucky Atkins and Marcus Banks. The Celtics also received a conditional first-round draft pick and cash in the deal and sent a second-round pick to the Lakers.

It remains to be seen whether Fox will join Boston, with whom he spent the first six seasons of his career. The 35-year-old guard/forward reportedly is contemplating retirement after 13 NBA seasons because of nagging injuries, according to Celtics director of basketball operations Danny Ainge.