It was Nike that helped create today's sports marketing landscape in which shoe companies look around for prospects alongside NBA scouts to make sure the next Michael Jordan doesn't pass them by.

Shoe companies sponsor AAU teams, allowing it to tap the high school ranks. They sponsor the all-star games in which prep players showcase their talents before leaping to either college or the NBA. And just in case it's not the NBA, shoe companies sponsor college teams and fill the pockets of their coaches. 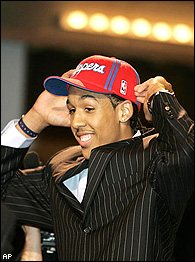 But a year after essentially cornering the market on the NBA's stars of tomorrow, Nike has chosen to take a seat on the bench. As of now, the world's largest athletic shoe company, which will generate more than $12 billion in sales this year, has only one player on its roster -- Chicago Bulls guard Ben Gordon -- who was selected in this year's NBA draft.

Nike could still pick up Gordon's college teammate Emeka Okafor, who was drafted second overall by the Charlotte Bobcats, but, in the eyes of shoe executives, power forwards and centers are not considered as marketable as small forwards and guards. The last of this year's high-profile shoe free agents, Shaun Livingston, just signed with Reebok. Ralph Greene, Nike's director of global basketball, told ESPN.com that Nike had interest in Livingston "but he chose to sign for more money."

"Nike wasn't as aggressive as they usually are," said Livingston's agent Henry Thomas, who also represents Miami Heat guard Dwyane Wade and Toronto Raptors forward Chris Bosh. "They spent a ton of money last year and they decided they weren't going to do much unless someone jumped off the charts."

Sitting on its hands was understandable after Nike agreed to pony up more than $100 million to LeBron James and Carmelo Anthony through the 2009 NBA season. Nike-owned Converse also signed deals with Wade, Bulls guard Kirk Hinrich and Bosh, who finished third, fourth and fifth, respectively, in last year's Rookie of the Year voting. 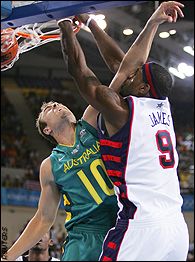 "They don't need to pay anyone significant money until [6-foot-5 high school freshman] O.J. Mayo comes around," said Sonny Vaccaro, who now works for Reebok basketball after spending years in the marketing departments of Nike and adidas.

Nike has a clock on its Web site counting down the days until the Nov. 6 release of his Air Zoom LeBron II shoe, and Anthony will get his first national signature shoe launch this season through the Jordan brand.

Nike still has the Los Angeles Lakers' Kobe Bryant, who signed a five-year contract worth more than $40 million last year. Due to Bryant's legal troubles, the shoe pegged for Bryant -- the Air Hurache 2K4 -- still was released last winter, but Bryant wasn't part of the promotions plan. Though criminal charges against him were dropped, Bryant still must face a civil trial and Nike officials have not unveiled their plans.

"We believed in these kids," adidas spokesman Travis Gonzolez said. "The risk on taking LeBron at the numbers he was commanding was so huge and Carmelo only negotiated with Nike, so the upside was good in securing these kids this year."

Of those signed, Telfair will be the only one to immediately get a signature shoe. Telfair's Gameday Lightning will hit stores Dec. 17.

Signing a deal with Livingston, who was drafted by the Los Angeles Clippers, was even more significant to Reebok, which recently opened a store in Beverly Hills.