EAGLE, Colo. -- The woman who accused NBA star Kobe Bryant
of sexual assault called her mother the day after the incident and begged
her to come home. There, the woman said: "Mom, I was raped last
night," according to previously sealed documents released Friday. 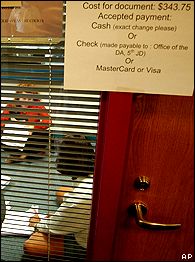 The conversation recounted by an investigator for the Eagle
County prosecution team was included in 625 pages of documents and
case files that are being disclosed publicly for the first time.
The criminal case was dropped last month at the accuser's request.

"I could tell something was wrong. She kind of mumbled things
and the way she walked in, her tone of voice," the mother said
during a conversation with an unidentified interviewer in August
2003, little more than a month after the alleged attack at a
Vail-area resort where Bryant was a guest and the woman was a
front-desk employee.

"She didn't want to tell me anything at that time," the mother
said. "I knew she would tell me when she was ready."

"Mom, you need to come home. I need to talk to you," she said,
according to the interview transcript from prosecution investigator
Gerry Sandberg. When she arrived, she said her daughter had been in
bed crying and asked the teen what was wrong.

"Mom, I was raped last night," her daughter said, then told
her mother it was Bryant.

The 26-year-old Los Angeles Lakers star has said the sex was
consensual. Prosecutors dropped the felony sexual assault charge
when the woman said she did not want to participate in a trial
after a series of legal rulings against her and courthouse gaffes
revealed her name on a state Web site.

The release of the documents follows last week's release of
other previously sealed case records. Not released are various
reports from the sheriff, records from the hotel where Bryant
stayed, cell phone records of several people, unspecified court
documents and investigators' interviews with witnesses regarding
the accuser's sexual activities.

Among documents excluded from the package were various reports
from the sheriff, records from the hotel where Bryant stayed, cell
phone records of several people, unspecified court documents and
investigators' interviews with witnesses regarding the alleged
victim's sexual activities.

The woman still has a federal civil lawsuit pending against
Bryant that seeks unspecified damages.

In a Sept. 12, 2003, interview with Boulder County district
attorney's investigator Tom Bennett, the woman said she didn't want
to report the alleged attack to authorities.

When Bennett asked why, she said "I, I wondered if people would
believe me. I really didn't think anybody would. ... Because of who
Mr. Bryant is."

Also included in the documents was a report from an investigator
with the New Mexico attorney general's office, who helped with the
case. She had talked with teenagers in Calgary, Alberta, where the
accuser traveled several months after the alleged attack.

One of the teenagers, Kylie Robinson, said she felt the woman
was not behaving like a rape victim, but said she understood people
can react differently.

"Kylie did not feel that [redacted] was a victim of a sexual
assault because she seemed to make a joke of it and commented about
money she was going to get from the trial," the investigator
wrote.

Last month, Bryant's attorneys abruptly dropped a bid to
permanently seal evidence in the case and claimed the woman had
retracted portions of her previous statements to investigators in a
letter written on July 31, 2004. That letter was released Friday
but there were no bombshells.

In it, the woman admitted she had lied about why she was late to
work the day of the incident: She had overslept, not run into car
trouble.

She also said she had wrongly told investigator Doug Winters
that Bryant had "made me stay in the room and wash my face."

"While I was held against my will in that room, I was not
forced to wash my face," she wrote to Sandberg. "I know that none
of these things change what happened, but I wanted you to know."

At one point, the mother was asked how she feels about her
daughter's truthfulness.

"She is honest with me about the important things," she
replied. "She is a normal teenager."

Investigators also spoke with Dave Pietrack, whose son, resort
bellman Bobby Pietrack, was among the first to see the woman after
the incident in Bryant's room and followed her home in his car
before going home.

The younger Pietrack woke up his parents and went with his
father to the kitchen to talk.

"Dad, you're not going to [expletive] believe me, you're going
to think I'm lying. Kobe Bryant raped [redacted]," Pietrack told
his father.

The elder Pietrack asked if it was possible the woman was lying.

His son said "it would have had to be the most incredible
acting job as [redacted] actions with him that night in the parking
lot were crying uncontrollably, shaking, near hysteria."

Pietrack also said the woman told him Bryant had warned her "no
one would believe you."