LOS ANGELES -- Phil Jackson called his relationship with Kobe Bryant at times a "psychological war" and sought to trade his star guard in January, according to a diary of the former Lakers coach. 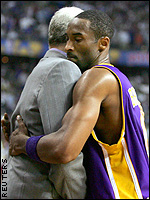 The diary of the 2003-04 season, titled "The Last Season: A
Team in Search of Its Soul," will be released this month. An
excerpt of the book will be published in next week's issue of Los
Angeles magazine.

"I do know that there were many occasions this year when I felt
like there was a psychological war going on between us," Jackson
wrote. "Amazingly, we came to a truce, even to a higher level of
trust. Ultimately, though, I don't believe we developed enough
trust between us to win a championship."

Jackson said the strain between him and Bryant led him to hire a
therapist to consult with during the season, according to the Los
Angeles Times, which printed excerpts from the magazine article in
its Tuesday edition.

"It's no sweat for me, man," Bryant said Tuesday. "He's a great
coach. I really learned a lot from him and I respect him from that
standpoint. But this is a new challenge for me here, so I'm not
going to belabor what somebody might say from past events."

Jackson wrote he became so frustrated with Bryant that he told
general manager Mitch Kupchak in January, "I won't coach this team
next year if he is still here. He won't listen to anyone. I've had
it with this kid."

It was not the first time Jackson requested the team trade
Bryant. He sought to trade him to the Phoenix Suns for Jason Kidd
and Shawn Marion in the 1999-00 season. But then-general manager
Jerry West told Jackson that owner Jerry Buss would never trade the
Laker star, he wrote in his diary. Jackson said he was told the
same thing last season.

The Lakers released a statement on behalf of Buss and Kupchak,
saying Jackson's book contained "several inaccuracies" but
declined to elaborate.

"There are anecdotes that portray things that took place or
were said in private, closed door meetings," the statement said.
"While Phil has chosen to go public with some of what took place
in these meetings, we will respect the spirit of privacy which we
feel should be maintained and therefore will not respond to these
entries.

"It should be remembered that most of what is contained are
Phil's opinions and should be taken with that understanding, not as
fact," the statement said.

"We've had our tough times, we had our share of arguments, but
I've always respected him as a coach," he said.

Jackson became exasperated with the feuding between Bryant and
Shaquille O'Neal.

"At times the pettiness between the two of them can be
unbelievably juvenile," he wrote.

Jackson wrote that Bryant was angry that O'Neal received
allowances from the Lakers organization, but that "nobody this
year, or in any year I've coached, has received more 'allowances'
than Kobe Bryant."

Among those allowances was the Lakers organization's partial
payment for the private jets Bryant took to Colorado for the
hearings in his rape case.

Bryant complained about the kind of plane he was given to fly to
Colorado, Jackson wrote, adding "He should feel fortunate that
he's not footing the bill himself."

Jackson said he became conditioned to blame Bryant, even when it
wasn't the player's fault.

The sexual assault charge against Bryant was dismissed last
month at his accuser's request, but he still faces a lawsuit filed
in Denver by the woman.

Bryant told Jackson that O'Neal's presence on the team would
affect his decision to stay with the Lakers, adding, "I'm tired of
being a sidekick," Jackson wrote.

Bryant has said he had no role in Jackson or O'Neal's departure
from the team. Jackson retired, and O'Neal was traded to the Miami
Heat. Buss also said the decision to trade O'Neal was made
independently of Bryant.

Jackson said he had run-ins with O'Neal as well but that
coaching him was "an experience I will cherish forever."