DENVER -- Denver Nuggets general manager Kiki Vandeweghe
fired coach Jeff Bzdelik in the midst a lackluster season that
started with so much promise.

He may not have had a choice. 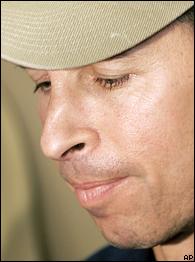 By refusing to renew Bzdelik's contract last season, Vandeweghe
left the coach dangling and looking over his shoulder at just about
every turn. Not getting the full support of the general manager had
to undermine some of Bzdelik's authority.

And it certainly didn't help that the Nuggets hired Michael
Cooper, who takes over as interim coach, as an assistant in the
offseason.

"This is a game of rumors, innuendo and things like that,"
Vandeweghe said Tuesday after letting Bzdelik go. "Sometimes
that's fun and keeps everyone's interest. Sometimes it works
negatively. In this case, it was made very clear. Everyone on the
inside understood the exact situation."

It still had to be hard on Bzdelik.

He took over one of the league's worst teams in 2002 and though
the Nuggets tied for the worst record his first year, they were
much better defensively and became known for their hardworking
ways.

A roster overhaul and the addition of Carmelo Anthony made a
huge difference last season. Denver improved 26 games to 43-39 in
the sixth-best turnaround in league history, reaching the playoffs
for the first time in nine years.

None of it seemed to help Bzdelik's status.

Vandeweghe refused to address Bzdelik's contract situation all
last season and it seemed the only reason the coach was back this
year was because of a contract clause that called for his one-year
option to be picked up if the Nuggets made the playoffs.

"None of us have any guarantees on tomorrow," Bzdelik said.
"I've seen coaches with five or six years left on their contract
and get let go and players not responding to them. So I was proud
of the effort our players had exhibited over the last several
games."

After a nationally televised 19-point loss to Cleveland on Dec.
3, Bzdelik questioned whether his team was in shape and he has said
on numerous occasions that his team wasn't giving full effort.
Those aren't exactly the comments of a coach who has the ear of his
players.

"I didn't feel like the team was responding the way we had
hoped," Vandeweghe said. "These things don't happen overnight,
it's an evolution. I can't pinpoint when this trend started, but it
started a while ago."

The next question is, who's next?

Cooper was hired to be an assistant and not Bzdelik's
replacement, and is only supposed to fill the role while the
Nuggets search for a full-time coach. Then again, he could be the
best fit for the job.

One of the best defensive players in NBA history, Cooper could
impart some of his knowledge to a team that has been defensive
lacking. He's also got plenty of experience.

"We may not have all the answers on Day 1," Vandeweghe said.
"Michael has all the qualities to be an excellent head coach in
this league and lead a championship drive. For today, I thought we
needed to make a change and Michael was the best person."