SALT LAKE CITY -- As much as Karl Malone wanted to win an NBA title, he just didn't have the desire to play a 20th season. 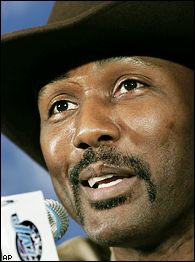 Malone officially announced his retirement Sunday, ending his career where it started when the Utah Jazz selected him with the 13th pick in the 1985 draft.

"Even though I left for a year, I grew here as a Jazz man," Malone said at a news conference at the Delta Center. "If I'm fortunate enough to go into the Hall of Fame, I will go as a Jazz man."

The 41-year-old finishes second on the NBA's career scoring list with 36,928 points, just 1,459 behind Kareem Abdul-Jabbar.

Malone met with the San Antonio Spurs last week and was considering a return, hoping for one more chance at a championship ring, but he decided that mentally he couldn't play at the level that made him one of the best ever in the league.

Malone had knee surgery last summer and said he was fully recovered from the injury that forced him to miss half of last season. But his mind wasn't up to returning to basketball.

Malone said he wanted to keep from getting too emotional, and he succeeded -- even when recalling Utah's glory days of the 1990s. Sitting on platform with his wife, Kay, Jazz owner Larry Miller and coach Jerry Sloan, Malone thanked the Jazz for picking him after 12 teams had passed.

An avid outdoorsman, Malone sported a cowboy hat and T-shirt. He still looked to be in great shape, showing that he hasn't let up on the relentless workouts that allowed him to play into his 40s.

The news conference was packed with reporters, some fans and a few former teammates who came to say goodbye to the certain Hall of Famer.