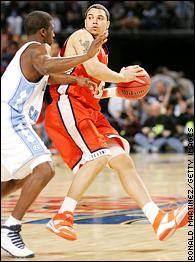 Williams said Tuesday night that he has signed with an agent,
which prevents him from returning to the Illini next season.

"It has been my lifelong dream to play in the NBA," Williams
said. "I felt this was an opportunity I could not pass up."

The 6-foot-3 Williams, a third-team AP All-America known for his
playmaking and defensive abilities, averaged 12.5 points per game
this season as the Illini reached the national championship game,
but he led the team with 264 assists, an average of almost seven
per game. He was selected first-team All-Big Ten for the second
consecutive season.

Against Arizona in the Chicago Regional final, Williams sparked Illinois' remarkable comeback from a 15-point deficit over the
final 4 minutes of regulation. His 3-pointer sent the game into
overtime and he hit two more, helping Illinois reach the Final Four
with a 90-89 win.

The Illini were undefeated until their final game of the regular
season and went into the NCAA tournament with a 37-1 record.

In their 72-57 national semifinal against Louisville, Williams held Cardinals guard Francisco Garcia to just four points, well off his 16-point average. The Illini lost the championship game 75-70 to North Carolina.

Williams said that was enough to persuade him to retain an
agent, and he signed with Bob McClaren of Houston over the weekend.

"Once you sign with an agent, it's over, there's no coming
back," Williams said. "I definitely wanted to be sure I was in
the best position I could be and I found that out so I just decided
to sign."

Williams said he plans to finish the semester at Illinois before
moving to Houston in late May to work out in the final weeks before
the draft.

Weber said Williams will be about 20 hours shy of getting his
degree in sports management.