CHARLOTTE, N.C. -- As Emeka Okafor walked the course at the
Wachovia Championship, golf fans stopped the Charlotte Bobcats
forward to congratulate him on winning the NBA's Rookie of the Year award. 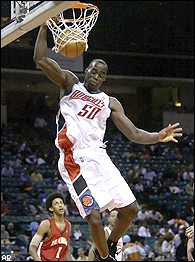 Even Tiger Woods made a point to offer well wishes.

Only then did Okafor realize just what the award meant.

"I think I underestimated the value of how people would react
to it," Okafor said Wednesday after the official award
presentation. "We went out to dinner last night and people were
yelling, 'Hey, Rookie of the Year! That's great!' and today on the
golf course everyone was cheering for me."

So which was cooler -- the award or meeting Woods?

"I have to go with the award," Okafor grinned. "Sorry,
Tiger."

But the greatest pleasure has been the reaction from the Charlotte fans, who are still lukewarm when it comes to embracing the NBA and their hometown Bobcats. After feverishly supporting the Hornets during most of their 14-year tenure, fans tuned out professional basketball after the Hornets fled to New Orleans.

It's put pressure on Okafor, the No. 2 overall pick in the NBA draft, to carry Charlotte's expansion team and give the city something to be proud of.

"For all of us, the city, the organization and Emeka especially this is a tremendous honor," Bickerstaff said. "It was not an easy selection because of the quality of talent in this rookie
class.

"I wanted it to happen for Emeka because he was a very professional young man who had presence and a routine and it was really special."

Okafor became the first former college player to win the award in four years. Cleveland guard LeBron James and Phoenix center Amare Stoudemire, who both jumped from high school to the NBA, were
the last two winners of the rookie award.

Memphis forward Pau Gasol, who won in 2002, played
professionally in Spain before coming to the NBA.

Okafor led all rookies in scoring (15.1 points a game) and
rebounding (10.9 rpg) and was second in his class behind Atlanta's
Josh Smith in blocks (1.71). He also ranked second in the NBA with
3.8 offensive rebounds a game.

He ended his season with 47 games in double figures in points
and rebounds.

Okafor received 77 of the 126 first-place votes from a media
panel. He finished with 514 points while Chicago Bulls guard Ben
Gordon, Okafor's teammate and roommate at the University of
Connecticut, was second with 433 points.

Gordon, the No. 3 pick in the draft, won the NBA's Sixth Man
award Tuesday.

Okafor said the head-to-head battle with his college roommate
for the rookie award was sometimes uncomfortable for the two
friends.

"Ben and I are not too big on individual awards," he said.
"We really didn't want to bring it up and I think when asked about
it, we were both just aware of each other."

But both of them ending the season with their own individual
awards made it worth it.

"It's a great thing. Ben and I shared dorm rooms and a dream
and [an NCAA] championship," Okafor said. "For us to be able to
get an award each, it's just a nice storybook ending."