PHOENIX -- After unleashing the Phoenix Suns to a frenetic
pace and guiding them to a league-best 62 wins, Mike D'Antoni is
the NBA's coach of the year, according to several sources. 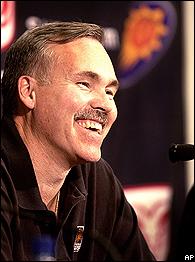 The outcome of the vote has been reported by two Arizona newspapers and The Associated Press.

D'Antoni is to be presented with the award at a news conference Tuesday, two days after Suns point guard Steve Nash was named the league's Most Valuable Player.

"Mike's been unbelievable this year," Nash said at the morning
shootaround before Monday night's Game 1 against Dallas in the
Western Conference semifinals. "He's extremely bright and finds a
terrific balance that's so important in this league of holding guys
accountable and at the same time giving guys the freedom to use
their tools to help the team win."

D'Antoni spent 20 years in Italy as a star point guard, then a
highly successful coach. His first stint as an NBA head coach was
with Denver, where he went 14-36 in the lockout-shortened 1999
season.

He was fired at the end of the season and general manager Dan
Issel named himself coach. D'Antoni was a scout with San Antonio
and an assistant to coach Mike Dunleavy in Portland before
returning to Italy in 2001.

A year later, he was lured back to the NBA to become an
assistant to Suns coach Frank Johnson. When Johnson was fired in
December 2003, D'Antoni took over.

The young team finished 20-41, but the seeds of this year's
turnaround were sown when Phoenix traded Stephon Marbury and Penny Hardaway to the New York Knicks.

That cleared salary cap room for the signing of Nash and Quentin Richardson before this season. D'Antoni, who loves a fast-paced
game, decided to go with a small, speedy lineup because those were
his five best players and they all wanted to start. The result was a 31-4 record out of the gate, and a 33-win turnaround.

"It's an honor, no doubt about it," D'Antoni said of the
impending award. "I mean, [Suns president] Bryan Colangelo had the
vision. He's the one who put all the pieces together and held true
and got the players on the floor. From there, the players took over
and did a heck of a job."

"Hopefully, I helped out and tried to get them going in the
right direction," D'Antoni said, "tried to put them where they
could perform the best. But those are two pretty big pieces that
have to be in place before I get any kind of award."

"That's a huge part of him," Nash said. "He's willing to kind
of relinquish the reins sometimes. That's gutsy in this league. He
does it for the betterment of our team, but it takes a guy who's
not worried about his own ego."

Phoenix's 33-win leap from last season is the third best in NBA history. Cotton Fitzsimmons (1989) is the only other Phoenix coach to win the award. Fitzsimmons coached the 1988-89 Suns to a 55-27 record, a 27-game improvement.