Spencer Haywood successfully sued the NBA more than three
decades ago in a case that went all the way to the U.S. Supreme
Court, paving the way for teenagers to enter the draft.

These days he feels differently, and Haywood -- of all people --
is in favor of raising the age limit. 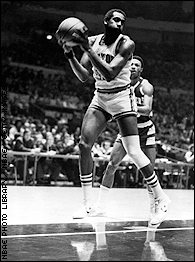 "I would say [union director] Billy Hunter made a smart move if
he did indeed raise it," Haywood said Friday. "He would give the
fans what they really want, an age requirement. It would give
players time to mature, and it also protects his veteran
constituents."

A proposed age limit is one of the items up for discussion in
collective bargaining talks, which will hit a critical juncture
Tuesday as a large group of owners and players meet in New York.
The league's current labor agreement expires June 30.

Stern has asked that the minimum age be raised to 20, while
Hunter has said he's philosophically opposed to establishing a rule
that would deny the world's best 17- and 18-year-old prospects an
opportunity to be drafted by an NBA team.

Under current rules, U.S. players can become draft eligible in
the year their high school class graduates. Foreign-born players
must turn 18 before the draft.

The current rules were the outgrowth of a landmark ruling by the
U.S. Supreme Court in 1971, Haywood v. NBA, that threw out the
league's old requirement that a player must complete four years of
college eligibility before turning pro.

Haywood turned pro after his sophomore season at the University
of Detroit, joining the ABA's Denver Rockets and leading the league
in scoring (30.0) and rebounding (19.5) in 1969-70 before jumping
to the NBA the following season.

"Those people who say LeBron James is the best ever at 19, they
didn't see me," Haywood said in a telephone interview.

In Haywood v. NBA, he argued that he had the inalienable right,
as an adult American, to earn a living to support his mother and
his nine brothers and sisters.

Haywood's victory set the precedent for the current rules, but
only three players -- Moses Malone, Darryl Dawkins and Bill
Willoughby -- made the jump from the preps to the pros during the
1970s and 1980s.

The trend took a significant turn in the 1990s when several of
the league's top superstars -- including Kobe Bryant, James, Tracy
McGrady, Jermaine O'Neal and Kevin Garnett -- decided to forsake
college and turn pro.

Stern believes the recent trend has left too many young urban
Americans falsely believing the NBA is a viable career path, and
Haywood -- who speaks regularly with high school students as part of
his work for the Detroit-based Spencer Haywood Foundation -- agrees.

"What's happening to those young people sitting around now,
they're not concerned about classes anymore," Haywood said. "That
to me sets a dangerous precedent, because you're not going to have
an intelligent athlete on the floor."

Haywood, 56, went on to draw an analogy between basketball and
music, pointing out that three or four decades ago a prospective
musician would need to learn how to read sheet music and master an
instrument before even thinking about playing in a band.

"Now you don't even have to sing, just show up and yell 'Let's
get the party going' 15 times. Their mind is not able to create a
sentence, so they come up with 'Your mama is a dog' and similar
nonsense. It's just ignorant. I see basketball taking the same
path. You don't even have to know your craft anymore."

Haywood, who has spoken to young players at the league's Rookie
Transition Program, would like to see the union leadership bargain
for improved pensions for retired players and take care of its
current core of veterans, whose jobs are often lost when teams
draft younger, less expensive players and wait for them to develop.

If Haywood's legacy is the early entry rule, he doesn't mind if
it's weakened through bargaining. Hunter has said he would only
raise the age limit if the NBA offered something "significant" in
return.

"I'm not out to hurt nobody," Haywood said. "I have too much
respect for fighting the rule, fighting the league. I love this
game so much, I love what my outcome was and how the league grew,
the number of players who have been able to earn a living, white
and black, European and American. It's a marvelous thing and a
great gift.

"I would never do anything to hurt the NBA or the Players
Association. I have too much respect for both of them," he said.
"I just believe it would be nice to get an agreement where players
would have more time to learn their craft."