Cavaliers owner Dan Gilbert got one Brown -- new head coach Mike Brown -- added to the payroll in recent days. Will he have another to add in the coming weeks?

Larry Brown has told two league sources that he plans to take the Cavaliers' offer to become their next team president. According to the sources, who spoke to ESPN.com on Monday evening, Brown said he would accept the position after the Pistons' season is over. 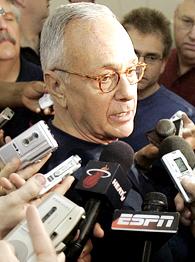 Brown is still under contract to Detroit, which trails the Miami Heat 2-1 in the Eastern Conference finals, and sources say he will continue to maintain publicly that he won't decide his future with the Pistons until 72 hours after their season is over. Given that timetable, pressing medical issues, his history of unpredictable decisions, and the fact he can't formally sign a contract with the Cavs until he resigns from his job with the Pistons, Brown's future in the NBA won't be certain until he attends a news conference for the Cavaliers to formally announce his hiring.

Brown continued to publicly deny having made a decision on his future in comments at the Pistons' shootaround Tuesday morning.

"Why should I worry about Plan B when I'm worried about being
healthy?" Brown said. "Why should I ever be thinking about that?
I want to coach here. I want to coach. This is what I've done my
whole life. I love this team. I think I've said that 100 times. No
one wants to write that."

Brown is known to have met with Cavaliers officials after the
Pistons gave them permission to speak to him nearly a month ago.


ESPN.com talked to a Cavs source who refused to confirm or deny whether Brown had given them an answer.

Brown was clearly upset Tuesday when he was confronted with questions about his future and lectured the media about diverting attention away from Detroit's series with the Miami Heat.

"Now I heard there was 'two league sources,'" Brown said at the shootaround in response to this report. "Who are the league sources? Why would somebody
write that instead of being up front and saying who it is? Why
would you do that?

"Don't just come out and throw things," Brown said. "That's
not fair. I'm coaching here. I have never changed in what I said.
Why should I think about alternatives? I don't even want to think
about alternatives."

Meanwhile, some of the Pistons try to remain pragmatic about their coach's situation.

Said Lindsey Hunter: "All I know is he's our coach now."

Brown said he had not spoken to his players about his future career plans.


Before Game 4 against the Heat at the Palace on Tuesday, Pistons guard Richard Hamilton told ESPN Radio the team was not affected by Brown's circumstances.

"Not at all. Like I said, it's just like a free-agent of a player on your team, you know. You don't know if guys is gonna be here the following year or whatever, you know. Our goal right now is to win a championship. We know that we won a championship with LB and hopefully we can win another one with him. That's all we can worry about."


In recent days, Brown has said repeatedly that he intends to check into a hospital after the season is over because of a serious medical condition. The condition has developed as a result of midseason hip surgery he underwent, and Brown wants a medical evaluation. However, sources maintain that while Brown's medical condition might keep him from coaching again, they do not believe it is serious enough to keep him from working as a team president.

Still, the sources claim that Cavaliers ownership pushed Brown to give them an answer this weekend before they lost out on other top candidates for the job. After hearing Larry Brown's answer, events leading to Mike Brown's hire were set in motion.

Pacers senior vice president David Morway, who had been the frontrunner to get the Cavaliers' GM position before Cleveland began flirting with Brown, had given ownership until Monday evening to make a decision before he had to withdraw from consideration. On Monday, Morway found out that the Cavs were going in another direction.

"I'm in a great situation in Indiana working for Donnie Walsh and Larry Bird, and have no desire to leave unless an unbelievable opportunity came along," Morway told ESPN.com. "When I first interviewed, I was told that the general manager position would have full authority over basketball-related decisions and report directly to ownership.

"However, over the course of the last week, they indicated that they were exploring hiring a high-profile team president that would have full control of all basketball decisions. After talking with ownership, it appears that's the direction they are going and as a result, I am no longer a candidate for the GM position.

"I appreciate the interest they showed in me and wish them the best of luck in the future."

Morway refused to confirm or deny that Brown was being targeted for hire by the Cavs.

Signs, however, are everywhere that Brown is coming aboard. Newly hired head coach Mike Brown is the protégé of Spurs coach Gregg Popovich, a close friend and confidant of Larry Brown.

The Cavs also recently interviewed Wizards director of player personnel Milt Newton for the vacant GM position. Newton played for Brown at Kansas and is another close friend who might be targeted to take over the day-to-day operations of the Cavs.

Information from the Associated Press was used in this report.