Editor's note: Dozens of NBA players, from stars such as Dirk Nowitzki and Tony Parker to role players like Nenad Krstic and Darko Milicic, participated in the European Championships in Serbia-Montenegro. Simon Wilkinson covered the action for The Press Association in Europe and agreed to hook us up with daily dispatches. Here is the last of his reports.

BELGRADE, Serbia-Montenegro -- Dirk Nowitzki led Germany to the European Championships final to beat the odds and silence the critics.

But once there, the Dallas Mavericks superstar forward crossed the path of a Greek team that showed throughout this tournament how the power and togetherness of a full team often prevails over the might and greatness of even the best player in the world.

Now read the above two sentences again and substitute "Germany" with "Dallas Mavericks," the phrase "European Championships final" with "Western Conference finals" and the word "Greek" with "San Antonio," and you might just have caught a glimpse of how the 2006 playoffs could end up for the four-time All-Star. 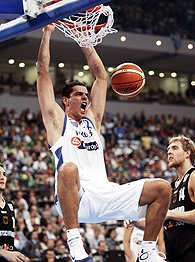 But Nowitzki did get a silver medal, and the individual accolades he largely deserved over the course of the last 10 days.

He was voted the tournament's Most Valuable Player and finished as its top scorer with an average of 26.1 points per game.

Not that the 7-foot forward was completely alone on the night. But his teammates weren't as good a supporting cast as they had proven to be in the quarterfinal and semifinal games.

As Germany head coach Dirk Bauermann said after the game, "In basketball, it's five on five. One man can't beat five men."

And this was true in the case of Germany during most of the tournament and none more so than during the final: Nowitzki stood alone.

However, he had troubles of his own, having to fight harder than usual for position against the physical and rugged Greek defense.

He made a lot of tough shots, none more so than his only 3-pointer of the game, a double-clutch shot at the end of the first half that pulled Germany within seven, 39-32.

He finished the night with 23 points and nine rebounds, but looked tired and struggled from 3-point range, going 1-for-8 only a night after he converted 5 of 10 against Spain.

"I'm very happy we won the silver medal," Nowitzki said. "No one believed we would make it this far after we lost our warm-up games. So we feel like we've overachieved and surpassed everyone's expectations, including our own.

"This is a great moment for German basketball. It's a huge moment in our nation's sporting history. We should all be proud of what we've achieved.

"We played our best and it wasn't enough against a Greek side which we played twice before the tournament and we could clearly see why they would be among the favorites to win it all. Because they are good from one through 12 on their roster."

The same, though, can't be said of Germany and of Dallas, which means Nowitzki has to carry both country and franchise.

Greece took the gold medal in the event for the first time since 1987, when it beat all the odds to win on home soil.

Greece's last significant result was a silver medal in 1989, when it was the defending champion. After that result, a severe drought in Greek basketball was to follow.

Despite Nowitzki's best efforts, Germany never led by more than two points and trailed most of the way.

For many Americans -- and still a lot of Europeans -- the Greek team is an enigma. The Greeks have a lot of talent, but most of them never made the trip across the Atlantic and a majority of them play in Greece or Russia, with less than a handful playing in the Italian and Spanish leagues.

The most famous Greek name stateside might well be Memphis backup center Jake Tsakalidis, who isn't even featured on the national team.

Antonio Fotsis is the only other Greek player on the current team who had a stint in the NBA -- ironically enough also with the Grizzlies -- back in the 2001-02 season.

But this nation has an old basketball culture and has such icons as Nikos Galis, arguably one of the greatest players never to play in the NBA.

Joining Nowitzki on the All-Tournament Team were Spain's Juan Carlos Navarro (who was drafted by the Washington Wizards in 2002), Phoenix Suns player Boris Diaw of France and the Greek duo of center Lazaros Papadopoulos and guard Dimitrios Diamantidis, who hit a desperation 3 to beat France in the semis.

Nowitzki averaged a double-double of 26.1 points and 10.6 rebounds. Navarro was second in scoring with 25.2 points per game and led all players in free throws attempted and made during the competition.

Diaw was among the top 15 in scoring, rebounding, passing and field-goal percentage. Papadopoulos went scoreless in the final, but had until then led Greece's offense with 11.3 points per outing. Diamantidis led all players in assists with 5.0 per game and was fourth in steals with 2.9 per game.

A day after suffering disheartening defeats to Greece and Germany, respectively, players from both France and Spain said they wanted to forget their setbacks for the time being and focus on the bronze medal game. But only France proved to be ready Sunday.

The win earned France its first medal in the European Championships since 1959.

The San Antonio Spurs' point guard played his best game of the tournament with 25 points, five assists, three rebounds and three steals and looked like the Parker of old.

The way Les Bleus played is how they want to play all the time, by relying on their athleticism and tiring the opposition with a running game.

And that certainly worked for their NBA stars, present and future.

While Diaw had a relatively quiet night, Golden State Warriors swingman Mickael Pietrus put on his own show by converting 5 of 7 shots from downtown to score 23 points, and added five rebounds and two assists.

His elder brother, Florent Pietrus -- who hasn't made it to the NBA despite taking part in some summer camps -- chipped in with 13 points and eight boards. Florent Pietrus has great defensive ability, with NBA.com blogger and French voice of basketball George Eddy likening him to "a mix of Bruce Bowen and Dennis Rodman."

Seattle SuperSonics second-round draft pick Mickael Gelabale, who has deferred his entry in the NBA to polish his game in Spain, finished with 13 points on 6-of-7 shooting, giving France five players in double figures and exemplifying what the team has been preaching since beating Serbia-Montenegro: that it can and will win when it plays together and shares the ball.

"This is a great moment for France," Parker said. "Two years ago in Sweden, when we lost to Lithuania in the semifinal, we didn't really know how to approach and play a bronze medal game against Italy.

"But this time around we had the experience and we showed that we could play with the best in Europe."

And the obvious questions about the upcoming NBA season were quick to come from everywhere.

"I don't really want to talk about it right now," Parker said. "Obviously Pop [head coach Gregg Popovich] did a good job of recruiting players like Michael Finley and Nick Van Exel. So we've got an even deeper bench than last year, which is why I believe we can repeat."

Diaw touched briefly on his move to Phoenix and how he could apply some of the lessons learned with the national team in the last 10 days to his NBA career.

"You know every experience -- good and bad -- I've gone through has made me a better person and a better player, and playing in the European Championships is definitely something that teaches you a lot," Diaw said.

"But right now, we're just going to enjoy this bronze medal. Winning it shows that all the hard work we've done over the last month and a half wasn't in vain. Who would have thought last Tuesday before we beat Serbia-Montenegro that we could qualify for the World Championships and finish third?"

But most of all, for all the French players, this was a game that enabled them to have a bit of fun.

Spain had an early lead but its fatigue was soon apparent, as Les Bleus beat the Spaniards on the boards at both ends of the court and turned the game into an exhibition in the second half.

The fans were treated to an aerial display from the Pietrus brothers, and Diaw and Parker were their spectacular NBA selves, driving time and time again and scoring on tough, off-balance layups.

Calderon played only 24 minutes and finished with five points and two assists. Vazquez -- who decided against playing in Orlando this year to work on his game in Spain -- was not the explosive and hustling player he was in the past two games. As for Navarro, who entered the game as the tournament's leading scorer, he had a relatively quiet night by his standards, with 17 points.

"Yesterday's defeat was tough to swallow, but we thought we did a good job of putting it behind us to be able to play France to the best of our ability in the bronze medal game," Navarro said. "However, they proved to be too good on the night and we looked like a shadow of our usual self. We couldn't do anything to slow down or stop their athletic players."

In the day's other games, Croatia beat Russia 92-74 to finish seventh. Utah Jazz star Andrei Kirilenko did not play for Russia and Viktor Khryapa and Sergio Monya failed to fill the void.

The Croats were without their trio of NBA players, Gordan Giricek of the Utah Jazz, Zoran Planinic of the New Jersey Nets and Mario Kasun of the Orlando Magic.

Simon Wilkinson writes for The Press Association in Europe.