Maccabi, the winner of 45 of 51 Israeli titles and three of the
last five Euroleague championships, had lost nine straight
exhibition games against NBA teams since beating the then-champion
Washington Bullets in 1978.

"This is history," Maccabi center Yaniv Green said. "They are
still talking about [Maccabi's win over the Bullets] and I'm sure
20 years from now, they will still be talking about this one." 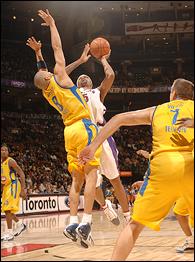 Parker, who played in the NBA for Philadelphia and Orlando, had
24 points, and Nikola Vujcic added 21 points and 10 rebounds. Chris
Bosh had 27 points and 12 rebounds in 45 minutes for Toronto, and
Jalen Rose had 18 points in 41 minutes.

"They played this game like it was their championship game, and
rightfully so," Rose said. "Those guys are hungry for NBA jobs.
You don't just go to Europe because you're turning down the NBA,
you're going to Europe because you want to be in the NBA so when
you're standing up against a guy in front of you that's is in the
NBA, you want to prove to anybody that's watching that you're
NBA-worthy."

Toronto's loss was just the second by an NBA team in the 28
games held since the NBA sanctioned international competitions in
1987. The Atlanta Hawks lost to the Soviet national team 132-123 in
1988.

"To lose is unacceptable," Raptors coach Sam Mitchell said.
"To say, 'To lose to a team like that,' would be disrespecting
them. I would look like an idiot to stand up here and disrespect
the team that just beat you. You have to respect what they've done,
you've got to respect their effort."

Maccabi's Yaniv Green blocked Rose's layup attempt and Mike
James' jumper before Will Solomon gave the Israeli team a 95-93
lead with a 3-pointer -- its first lead since the first quarter.

James' driving layup tied it at 103 with 19 seconds left.

But Parker -- isolated with Morris Peterson guarding him -- made a
jumper with a hand in his face to give Maccabi the lead. Peterson
missed a long 3-pointer at the buzzer.

"We got beat,'' Mitchell said. "We knew those guys were going
to play hard playing against an NBA team. They came out to prove
something. It doesn't matter who you play or how good you think you
are, you've got to come here to play."

Many of the 17,281 in attendance cheered for Maccabi. The
consular general for Israel in Toronto slapped hands and joined the
team in the celebration as NBA commissioner David Stern hurriedly
walked off the court.

"Everywhere we go, it's such a great organization to be a part
of," Parker said. "We always have great fans following wherever
we are. It was really fun, it's fun to be a part of history."