INDIANAPOLIS -- Indiana Pacers guard Stephen Jackson, contending that a new ban on chains worn over clothing is "a racist statement" from the league, wore every long, diamond-studded chain in his collection Tuesday night as a protest. 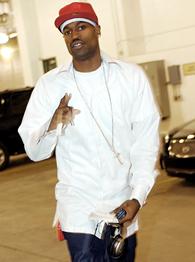 Jackson voiced no opposition to the bulk of the "business casual" demands in the NBA's new dress code, but he described the jewelry ban as "attacking young black males."

"I think it's a racist statement because a lot of the guys who are wearing chains are my age and are black," said Jackson, 27. "I wore all my jewelry today to let it be known that I'm upset with it.

"I'll wear a suit every day. I think we do need to look more professional because it is a business. A lot of guys have gotten sloppy with the way they dress. But it's one thing to [enforce a] dress code and it's another thing if you're attacking cultures, and that's what I think they're doing."

Jackson made his comments before Tuesday's home exhibition game against San Antonio, with the four chains he wore to work hanging in his locker -- one sporting his initials, two with a crucifix and a fourth depicting Jesus Christ.

A section in the new dress code listing items players are not allowed to wear on team or league business includes "chains, pendants or medallions worn over the player's clothing."

"I know a lot of guys on my team are upset and I have no problem speaking up on it," Jackson said.

Jackson, though, said he wouldn't openly defy the rule if it means he keeps "giving money back" in fines.

San Antonio's Tim Duncan, also a critic of the new policy, did not play in Tuesday's game and sat on the bench wearing an untucked shirt and baggy jeans -- attire that could result in a fine if seen during a regular-season game.

"I think it's a load of crap," Duncan told the San Antonio Express-News. "I understand what they're trying to do with [forbidding] hats and 'do rags and [retro] jerseys and stuff. That's fine. But I don't understand why they would take it to this level. I think it's basically retarded.

"I don't like the direction they're going, but who am I?"

Duncan told the newspaper that, in the future, he might choose to stay in the locker room on nights he isn't playing.

A specific range of penalties has yet to be announced, but league officials have already made it clear that violators of the dress code will be fined -- as well as their teams -- with repeat violators subject to suspension.