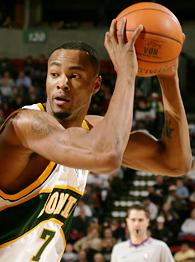 Lewis, 26, was driving one of five cars speeding eastbound
together at about 3 a.m. on Sept. 30, Washington State Patrol
Trooper Curt G. Boyle wrote in an investigation report filed in
King County Superior Court. Boyle wrote that he tried to pull over
all five vehicles, which were traveling at up to 84 mph, but only
two stopped.

One, a 700-series BMW, was driven by Lewis, whose eyes were
watery and speech was slurred, Boyle wrote. Lewis failed a field
sobriety test and was taken to the Mercer Island Police Department,
where he registered a 0.132 and 0.122 on successive breath tests,
Boyle said. The intoxication threshold in Washington is 0.08.

"I have been charged with a traffic offense involving alcohol.
I have cooperated fully with the police during the investigation.
Since the charge is pending, my attorney and I are working together
to resolve this situation.In the meantime, I do not have any
further comment and I look forward to the matter being resolved
soon," Lewis said in a statement released by the team.

The driver of the other car that stopped, Gregory S. Stern, also
has been charged with drunken driving, King County prosecutor's
spokesman Dan Donohoe said.

Lewis, a forward who has scored 20 points in six consecutive
games, faces a maximum year in jail, $5,000 fine and 90-day license
suspension if convicted as charged.

"This incident happened before the season and we're looking
forward to this matter being resolved soon," Seattle general
manager Rick Sund added in the statement.