MIAMI BEACH, Fla. -- Look out criminals, Officer Shaq is on the beat.

The Miami Heat's Shaquille O'Neal was sworn in as a reserve police
officer Thursday in a private ceremony. 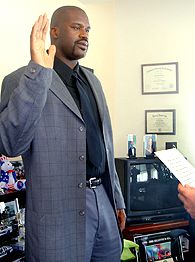 The 7-foot-1 superstar skipped the department's public
event earlier in the day to avoid the media attention, opting
instead for a quiet, no-frills ceremony.

"Officer O'Neal is very considerate toward the other officers,
and he was afraid if he was there he would have taken away from
that moment for other officers," department spokesman Robert
Hernandez said. "This is a very special time for them and their
families."

The former Laker was a reserve officer in Los Angeles before
moving to South Florida. He spent the past year training for the
Miami Beach police reserve officer position and can now add the $1
a year salary to his $100 million, 5-year contract with the Heat.

As a reserve officer, O'Neal will be able to carry a gun, wear a
badge and make arrests, but with his celebrity status, it is
unlikely he'll ever be able to walk the beat or go undercover.

O'Neal has said he is most interested in working with the
special victims detective unit to help stop crimes against
children.

"He made it clear when he decided to come to Miami Beach that
he didn't want to just be a poster boy for photo ops, he wanted to
get down and dirty and do the job," Hernandez said. "He's here to
conduct investigations and to make arrests."

And in September he did just that. After seeing a man throw a
bottle and yell anti-gay slurs at a passer-by, O'Neal trailed the
man and helped an officer arrest him as a hate-crime suspect.