Ron Artest stunned the Indiana Pacers on Saturday by requesting to be traded, telling the Indianapolis Star that he believes the team would be better off without him. 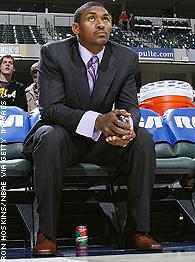 Artest, who has missed three two games because of a wrist injury, told the Star that he doesn't like playing for coach Rick Carlisle and would prefer to be dealt to the New York Knicks.

"I think I cause a lot of problems here," Artest told the Star in a one-on-one interview Saturday; the story first appeared on the newspaper's Web site. "If the trade rumors, if there is any truth -- maybe it won't be a bad thing. They probably could win more games without me."

Artest said he wants to play in an offense where he's allowed to shoot more, adding, "If it was a perfect world, I would be going to New York."

Pacers chief executive Donnie Walsh was taken aback by Artest's request, saying the former All-Star and defensive player of the year had never raised such concerns with team officials.

"I've never heard him say anything before," Walsh told the Star. "He hasn't talked to me, and I see him every day.

"He can always come up and talk to me or [team president] Larry Bird," Walsh said. "From here on out, I expect Ronnie to be a professional. ... [This] isn't the best way to get a trade done."

"You never want to lose someone like that," Carlisle told the newspaper, calling Artest "one of the elite talents in the league."

"If Ron feels that way, then that's the way he feels," Jermaine O'Neal said after the Memphis game. "We're going to go to war with any guy that wants to wear a Pacers uniform.

One of the NBA's best defenders as well as one of the league's most combustible players, Artest set off last season's Pistons-Pacers brawl at the Palace of Auburn Hills by charging into the stands after a fan who threw a drink. Artest was suspended for the balance of the season -- 73 games.

"I think [Indiana] will be a better team without me."

Artest said Carlisle is a good coach, but criticized the Pacers' structured offense as too restricted for him.

"I'm so demanding of the ball. It's not my fault," Artest told the Star. "Every time somebody is on me it's a mismatch. It messes up the offense. I like Coach [Carlisle] as a person, but I don't like playing for Coach. I like my team, though."

"Don't get it twisted. He's a very good coach. He knows what he's doing. I personally don't like playing for him. I would not want to see him get fired for me after all the immaturity I've been through with this organization."