PHOENIX -- Suns forward Amare Stoudemire, who remains on course to resume basketball activity after the All-Star break next month, told ESPN.com on Friday that he doesn't expect to play his first real game until sometime in March. 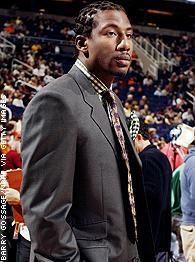 Stoudemire underwent microfracture surgery Oct. 11 after knee soreness that surfaced during the offseason worsened during the first week of training camp. The Suns announced at the time that Stoudemire would miss "approximately four months," citing the nominal size and location of the defect and Stoudemire's age (he turned 23 on Nov. 16) as the basis for their belief that he could return to the practice floor in February.

Stoudemire's rehab, in the words of coach Mike D'Antoni, has progressed "ahead of schedule," to the point that Stoudemire is frequently seen shooting stand-still jumpers or free throws at practices. But D'Antoni cautions that the Suns will not budge from "a normal" recovery timetable.

The Suns acknowledge that the toughest steps of the recovery process are the latter steps. Stoudemire, who only just began what he called "hops and slight jumping," said Friday that he's not expecting to start jogging for another two weeks. Getting back into full-contact practices and restoring confidence in the knee are even bigger obstacles after Stoudemire proves he can run without discomfort.

Stoudemire, who signed a five-year extension worth more than $70 million days before the surgery, said he's willing to sit out the entire season if he can't get to full capacity, but the most likely scenario remains a second-half return. Noting that the Suns have only three games in February after the All-Star break, D'Antoni echoed Stoudemire's projection for a return to the active roster.

"You're probably looking at the first part of March," D'Antoni said.

"Both options are out there," Stoudemire said of rejoining the team in the near future or waiting until next season. "Rehab is going great, but it just depends on how I feel. I really want to win a championship, and we're very close with the team we have. But health is the most important thing right now to me."

Despite playing for much of the season without its two greatest sources of speed -- Stoudemire and guard Leandro Barbosa, who returns from a recurring knee injury Saturday against Cleveland -- Phoenix is on the pace for the 50-win season D'Antoni predicted even after losing Stoudemire.

Reigning MVP Steve Nash and All-Star forward Shawn Marion are the only healthy returnees from the primary rotation that carried the Suns to a 62-win season and the Western Conference finals last season, but Phoenix has overcome the injuries and the departure of guard Joe Johnson to lead the league in scoring again (105.1 points per game) and significantly improve its defense (holding 21 of the 28 foes under 100 points after a 3-4 start).