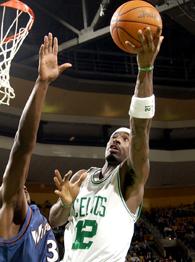 The Wolves had been involved in trade speculation for weeks,
with both Szczerbiak and Olowokandi frequently being mentioned in
rumors. In need of a spark after losing their last two games by 20
points or more, they finally made their move a day after a 107-87
loss to Memphis -- their third straight defeat.

Earlier, they dealt little-used 7-footer Nikoloz Tskitishvili to
the Phoenix Suns for a 2006 second-round draft pick.

Davis, who finished second in last year's voting for the
league's Sixth Man award, averaged 19.7 points this season as a
full-time starter for Boston (17-25).

The Celtics were delighted to receive a player of Szczerbiak's
caliber -- especially without giving up their star swingman Paul
Pierce, who's in the top 10 in the NBA in scoring.

"In Wally we are receiving an All-Star player who is
playoff-tested and who has been a winner at all levels," said
Danny Ainge, the Celtics' executive director of basketball
operations who was a longtime teammate of McHale's in Boston.

The 6-foot-7 Szczerbiak, an All-Star in 2002 whose subsequent
two seasons were marred by injuries, was flourishing as the No. 2
scoring option to Kevin Garnett. Always considered a step slow on
defense, Szczerbiak was averaging 20.1 points.

Though frequently mentioned in trade talks over the past several
seasons, Szczerbiak sounded surprised by the deal when reached on
his cell phone late Thursday night.

"You never know in this business," he said.

Szczerbiak and Garnett didn't always get along, especially on
the court, but the 1999 first-round draft pick expressed no ill
will toward Minnesota's franchise player. McHale danced around a
question about whether the duo's occasional dissonance drove this
deal. 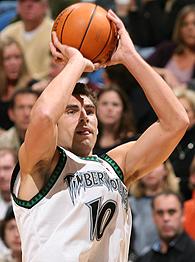 "Who knows?" he said. "K.G. and I have been teammates for
seven years. I've learned a lot from him. ... Now we're moving on
and breaking apart."

The 7-foot Olowokandi, a former first overall draft pick, was a
huge disappointment for the Wolves, who signed him as a free agent
in the summer of 2003. Jones was a developmental league player.

But for a team desperate for scoring beyond the top two options,
the package sent by the Celtics was a curious mix -- beyond the
talented Davis.

The 6-foot-7 Davis was a controversial figure in Cleveland,
where he played for the Cavaliers and ripped the city and the team
after being traded to the Celtics in December 2003. With him and
Trenton Hassell guarding the wings, the Wolves should at least be
stronger on defense. Banks, a point guard and former first-round
draft pick who was made expendable by the development of Delonte
West in Boston, should help supplement the sporadic Marko Jaric at
point guard.

Still, it's difficult to see this trade as much of an upgrade
for a Minnesota team that is struggling to stay in the mix for a
playoff spot.

"We just had to shake it up a little bit," said McHale, who
responded sarcastically to a question about whether he tried to
acquire Pierce and did not rule out another move before the Feb. 23
deadline. "We're always going to keep working."