NEW YORK -- New Orleans Hornets forward Chris Andersen was
dismissed and disqualified from the NBA on Friday for violating the
league's drug policy. 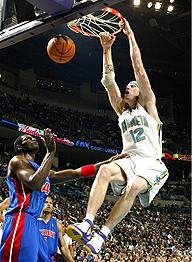 Andersen must wait two years before he can apply for
reinstatement, the league said.

According to the league's collective bargaining agreement, a
player can only be disqualified for a fourth positive test for
performance-enhancing drugs, or a first positive test for "drugs
of abuse."

The drugs on that list are amphetamine and its analogs, which
include methamphetamine; cocaine; LSD; opiates, including heroin,
codeine and morphine; and PCP.

Andersen has not previously been suspended for steroid use.

Andersen, 27, averaged 5.0 points and 4.8 rebounds in 32 games
this season, his fifth in the NBA. He played three seasons for the
Nuggets before joining the Hornets.

Hornets owner George Shinn said in a statement released by the
team, "we were obviously disappointed and saddened to hear that
Chris has been dismissed from the league.

"On behalf of his teammates, coaches and the entire
organization, we wish him well and hope he learns from this
experience," Shinn said.

Known as "Birdman" for his high-flying dunks, Andersen was a
favorite among Hornets fans in Oklahoma City, where the team is
playing most of its home games this season.

Neither the NBA nor the union is allowed to comment on specifics
of a player's drug test.

"The players' association plans on filing a grievance on Chris
Andersen's behalf," union spokesman Dan Wasserman said. "Our
expectation is that a grievance hearing will take place in
approximately two weeks."

The hearing will be heard by an independent grievance
arbitrator.

Andersen played in 67 games for the Hornets last season,
averaging 7.7 points and 6.1 rebounds.

He is best known for his performance in the NBA's dunk contest
last year when he needed eight tries to finish his first dunk.

Andersen is the first player kicked out because of drugs since
Stanley Roberts in 1999.

Material from The Associated Press was used in this report.