HOUSTON -- Former Seattle SuperSonic and Orlando Magic
player Shawn Kemp says he's ready to get back in the game after
three years of retirement from the NBA. 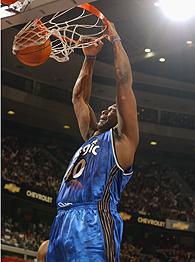 Kemp, 36, retired voluntarily from the Magic in 2003, citing
weight issues. During his last NBA season he weighed as much as 320
pounds, but he has slimmed down to 270 pounds through an intensive
exercise regime, he said.

"I've sat out this whole season to get in tip top shape to make
a comeback," Kemp said in an interview with Houston television
station KRIV.

The former All-Star faced troubles other than weight loss during
his career, which began when he was drafted by Seattle in 1989. He
took a leave of absence during the 2000-01 season to enter a
substance abuse program and violated the league's anti-drug policy
three times.

Most recently, a Seattle judge sentenced him in May 2005 to five
days of electronic home monitoring, a year's probation and a $440
fine after he pleaded guilty to attempted possession of more than
40 grams of marijuana.

Kemp said those problems were behind him and he was ready to
recharge his NBA career with an enthusiastic comeback.

"My love for the game is very, very high," Kemp said. "I've
made a living off of this game. I'm not coming back to play
basketball for any financial reasons."

"I'm not playing just to make someone's roster. I'm not just
playing to make a comeback. My hopes and dreams are to be in the
Hall of Fame one day."