NEW YORK -- Sure, the shooting in the NBA might improve. David Stern sees another benefit to the league's new official game
ball, though. 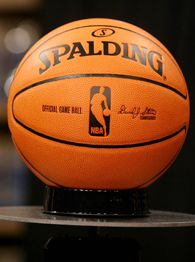 As the commissioner joked Wednesday, now his signature gets to
go on the ball twice.

That is just one of the changes on the new game ball, which was unveiled by league and Spalding officials at a news conference at
the NBA Store and will be put into use at the start of the 2006-07
season.

The biggest, and most important, difference is that the ball is no longer leather. Instead, it's made of a microfiber composite
that allows for a much better and more consistent grip.

The ability to grip the leather was a driving reason behind the
first change to the ball in more than 35 years.

"That really became a challenge, particularly when the ball was
wet," said executive vice president of operations Stu Jackson.

Jackson said the ball was tested at the 2005 All-Star Game and
predraft camp. The league then asked Spalding to make some changes,
and it was brought back for more testing at this year's All-Star
Game and in the Development League.

Most players will be familiar with the feel of the new ball. Stern pointed out that leather balls were no longer used at the high school or collegiate level, and Jackson estimated that "99
percent" of the league's players grew up using only a composite
ball.

"This is another step as we all work together to improve the game of basketball," Stern said.

Gone also is the old eight-panel design, replaced by one
featuring two panels -- each bearing the signature "David J.
Stern."

Boston Celtics All-Star Paul Pierce and former NBA player Kenny Smith both pointed to the inconsistencies of a leather ball, which they said needed to be broken in before it felt right. Plus, the feel of the balls differed from arena to arena.

Every one of the balls should now feel, grip and bounce the same.

"Maybe I can cut down on my turnovers next year," Pierce said.