ORLANDO, Fla. -- He showed the sophistication in his scoring, hitting stutter-step runners in the lane and high-arcing jumpers from the outside and even throwing in the occasional spin move from the post.

And he showed that famous fire, practically willing himself out of a first-night stinker with a jaw-dropping start for the ages.

But most of all, Adam Morrison showed Tuesday night why the Charlotte Bobcats feel they culled a megawatt star from last month's NBA draft with the third overall pick.

A night after missing 11 of 14 shots in a jittery NBA debut, Morrison bounced back in a big way by systematically dismantling the Chicago Bulls' summer league team. In the moments after his sizzling 25-point first half and 29-point night, Morrison had longtime NBA executives in awe of the performance he had just turned in on Day 2 of the Pepsi Pro Summer League in Orlando.

Everyone was surprised -- except, of course, Morrison. The former Gonzaga star seemed to take great pride in silencing his critics by hitting his first five shots Tuesday and scoring 15 of the Bobcats' first 21 points. Morrison did cool off in the second half, but it didn't seem to matter by then.

"I think what the Bobcats saw in my workouts was that I can move better than people give me credit for and I'm faster, I guess, than people think at first," Morrison said after Charlotte's 88-87 defeat of Chicago. "I like showing out here that I'm not just a spot-up shooter. I never was at Gonzaga, so I don't know where people ever get that idea. I think it's something that will transfer to the next level."

That looks like a certainty now, but some might have had their doubts after Morrison missed nine consecutive shots at one point in his first NBA game Monday. Bobcats summer league coach John-Blair Bickerstaff challenged Morrison in the moments before Tuesday's game, telling him, "the goal is to put the ball in the hole."

Morrison did have a chance to write a storybook ending to the game in the closing seconds, but his runner over fellow first-round pick Tyrus Thomas (17 points, 11 rebounds, two blocks) rimmed out. However, Charlotte center D'or Fischer tipped in the miss to keep the Bobcats (2-0) perfect in the summer league.

Morrison said he isn't about to get too high about posting a big game against the likes of Ugonna Onyekwe and fellow rookie Thabo Sefolosha. But, like most, he's quite eager to see how his game will transfer against some of the NBA's best small forward stars.

"I think every rookie is thinking the same thing right now, and it's going to be fun to get out there," Morrison said. "This league is so good for us young guys right now. To have a game like I did [Monday] night, making all the mistakes that I did, I was able to come back [Tuesday] and learn from them."

MOST IMPRESSIVE: Earl Barron, Heat.
Although Morrison's play was certainly impressive, the Barron was dominant in a different way for the Heat. The 7-foot, 245-pound center demolished New Jersey's front line to the tune of 33 points and 15 rebounds Tuesday night. 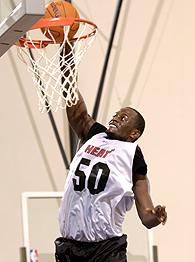 A night after scoring 18 points mostly on pick-and-pop jump shots, Barron did most of his damage from point-blank range Tuesday. He made 9 of 17 shots and got to the free-throw line a whopping 17 times, hitting 15 in Miami's 91-85 win.

Barron is hoping to stick with the Heat this season after spending most of last season on the inactive list and in the developmental league. He has a $475,000 team option in his contract for next season, one the Heat must pick up by July 25. Barron's chances of making the Heat improve dramatically if Alonzo Mourning decides to retire. His chances also certainly improve with more performances like Tuesday's.

"I'm just out here trying to prove myself and show how much I've improved," Barron said. "`I just want to continue to be aggressive, make strong moves and get to the foul line. As long as I keep playing hard, I'm going to be fine."

MOST DISAPPOINTING: Kevin Pittsnogle, Heat.
The tattooed power forward was an unquestioned college star at West Virginia, but he has struggled mightily with his shot so far in this summer league. His lack of athleticism and unwillingness to attack the rim have been apparent so far and were major reasons why he wasn't selected in the NBA draft.

Pittsnogle made just 1 of 8 shots in nearly 23 minutes Tuesday, with half of those shots coming from beyond the 3-point line. Not helping matters, he had more fouls (six) than rebounds (four).

In two games, Pittsnogle has hit just 2 of 9 shots.

• Overshadowed somewhat by No. 4 overall pick Thomas, Chicago guard Sefolosha has raised some eyebrows with his dazzling play.
Over two games, the 6-foot-5, 215-pound native of Sweden has proved himself to be a solid defender and a crafty scorer in the open court. He has made 11 of 16 shots -- most of them on slithery drives to the hoop -- and is second on the Bulls in scoring at 16 points per game. That's 2.5 points a game more than Thomas.

Chicago traded up to get Sefolosha, who originally was drafted 13th by the Philadelphia 76ers. So far, the Bulls have used him at both guard slots.

• Marcin Gortat is making a strong push to earn a spot on the Orlando Magic's roster, delivering a second strong performance Tuesday. But despite the Magic's need for another big body alongside Dwight Howard and Darko Milicic, they are expected to keep the 6-foot-11, 240-pounder in Germany for another season.

Gortat tipped in the game-winner with 17.7 seconds left, helping Orlando (1-1) to an 80-79 win over Indiana (0-2). Gortat, a native of Poland and a 2005 second-round pick of the Magic, had 15 points and eight rebounds one night after scoring 15 points, grabbing seven rebounds and blocking three shots on Monday.

Gortat just started playing basketball four years ago, leaving behind his burgeoning career as a soccer goalie. The Magic would prefer he return to his professional team in Germany and work on his game and body before possibly returning a year from now.
"You can see that he's still very rough, but he's athletic, runs the floor and blocks shots," Magic coach Brian Hill said. "I really think another year in Europe will do him good. But there's no doubt he's a young player who has a future in this league."

Odds and ends
Veterans Raymond Felton and David Harrison didn't play Tuesday after starring Monday. Felton, an all-rookie selection this past season, showed up unannounced and used Monday's session to stay sharp over the summer. ... The Magic's Web site, orlandomagic.com, received more than 300,000 hits Monday to view the summer league action. Because the event is closed to the public, the Web site is the only place for fans to watch the games.