ORLANDO, Fla. -- With each passing pick on draft night, the anger and confusion inside of Marcus Williams continued to build. This week, Williams is using the summer league as a release for those frustrations.

Projected as a likely lottery selection, Williams took a surprising tumble to the 22nd pick, where he was ultimately drafted by the New Jersey Nets. Questions about Williams' off-court attitude and his physical conditioning led to his stock falling on draft night. 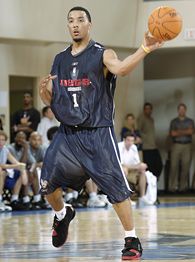 Out to prove himself to the teams that passed him over, Williams was one of the best players in the Pepsi Pro Summer League in Orlando through the first two games. Williams suffered through a dreadful, 0-of-7 scoreless game Wednesday in New Jersey's 89-62 loss to the Indiana Pacers, but his mission in this summer league is clear.

Through three games, Williams has been arguably the best point guard in the camp, dispelling the whispers that he was out of shape and unable to knock down open shots. He's averaging 13.3 points and 8.3 assists a game by routinely getting into the heart of opposing defenses.

"You usually want to temper your enthusiasm or criticism in the summer league, but you can already tell that Marcus has such a really good feel for the game and he's a gifted passer,'' New Jersey coach Lawrence Frank said. "You love how he anticipates plays before they happen and how he delivers the ball exactly where it needs to be.''

The Nets have been in search of a backup for Jason Kidd for years, but they never imagined Williams would fall to them two-thirds of the way through the first round. Frank said the Nets had Williams ranked among the top 10 players in the draft; picking the former Connecticut star, he said, was "a no-brainer.''

Williams claims he couldn't be in a better situation, learning the game from his idol (Kidd) and running the fast break with two thoroughbreds (Vince Carter and Richard Jefferson) on his sides.
But not even those circumstances ease his mind over why he fell so far on draft night. Even now, almost three weeks after the draft, Williams is still befuddled by what happened.

"It was confusing people saying that I was 215 pounds,'' said Williams, who says he now weighs 204 pounds. "I couldn't be out there playing 35-38 minutes a night and be overweight and out of shape.'' 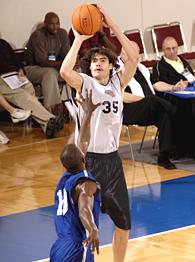 His first half Wednesday was nothing like Tuesday when he dropped a stunning 25 points on the Chicago Bulls. He started Wednesday's game by missing five of his first six shots, but he heated up just before the break. Morrison hit three of his final four shots of the first half and somehow wound up with a workmanlike 24 points in Charlotte's 103-87 thumping of the Orlando Magic.

Morrison made 7-of-17 shots, but he did get to the free throw line 11 times (making 10). Orlando's Matt Walsh and Alpha Bangura spent most of the game hammering Morrison when he posted up down low. He knows that teams will try to be physical with him once the regular season begins, and that's why he's eager to work with Charlotte's strength coaches in hopes of adding five pounds of muscle.

"They're going to do that with most rookies,'' Morrison said of the physical play. "That's part of the territory and it's why I want to get with the strength coach and put on a few pounds. The biggest thing for me is to be strong. With my body type it's hard for me to put on a lot of weight, so I just want to get stronger.''

MOST DISAPPOINTING: Marcus Williams, Nets
Williams followed up two stellar games with a scoreless effort in 26 minutes Wednesday. He missed all seven of his field goal attempts and turned the ball over three times.

Indiana's Jimmy "Snap" Hunter and James White played a big role in Williams' frustrations, hounding him all over the court.

• Miami guard Dorell Wright had his finest game of the camp so far, contributing 20 points, eight rebounds, eight assists and seven steals. Wright, who is close friends with Dwyane Wade, said the NBA Finals MVP has kept close tabs on him throughout the summer league.

Wade, who signed a three-year contract extension worth $44 million on Wednesday, has been stressing to Wright that now is his time to finally crack the Heat's rotation. Wright has put on almost 30 pounds the past two years, bulking up to 215 pounds and giving him the strength to withstand punishment when he drives into the lane. 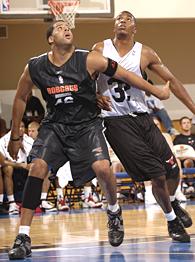 • When he starred at LSU this past season, Tyrus Thomas rarely strayed far from the low block, using his awesome leaping ability and majestic wingspan to become one of the game's top shot blockers.

But in the NBA, Thomas says he ultimately sees himself as a small forward. He stresses that he is most comfortable when shooting from the wing. But as the 19-year-old Chicago Bull proved Wednesday, he is still very much a work in progress.

Thomas, the fourth overall pick in last month's draft, missed 13 of his 17 shots and all three of his 3-pointers in Chicago's 92-88 loss to the Miami Heat on Wednesday night. He's shooting just 38 percent from the floor so far in the summer league, with most of his shots coming from the perimeter.

• Charlotte power forward Sean May, who missed most of his rookie season because of a knee injury, said he has no plans of leaving the summer league despite experiencing some swelling and soreness in his surgically repaired knee.

For May, who is averaging 17.7 points on 47.4 percent shooting through three games, playing in the summer league has actually been good therapy for his head as well as his knee.

"I knew I could come back and I'd be fine, but being out here playing against different people and in different situations, there's just no way to simulate live basketball games,'' said May, who had 16 points and five rebounds Wednesday in Charlotte's 103-87 defeat of the Orlando Magic.

May has looked thin and agile, but more impressively, he's obviously added some range to his shooting touch. He's stepped away from the low block several times for mid-range shots, and he's even made two 3-pointers in Charlotte's first three games.

"I've always been able to shoot and find different ways to be effective,'' said May, the Most Outstanding Player of the 2005 NCAA Final Four for the University of North Carolina. "In college, I was just more effective down on the block so I didn't shoot that much. But [the outside shot] is something I'm trying to add to my game again.''