LAS VEGAS -- The Houston Rockets claimed the rings
-- encrusted with cubic zirconia no doubt -- as the champs of the Vegas Summer League with a 5-0 record.

Right behind them were the Knicks, Nuggets and Kings, who all went 4-1. But don't look for banners in the rafters anytime soon.

Winning is nice, but summer league is about talent evaluation, especially with fresh out of the suit-and-cap draft picks. So as the biggest and most favored of the NBA summer league came to a close on Friday after nine days and 40 games, here's a look at the big winners off the superficial scoreboard. 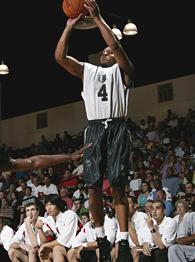 Top Rookies
• Randy Foye, Timberwolves -- He made Kevin McHale look pretty good in his first two weeks, outplaying every other rookie and veteran in Vegas to be named league MVP. He led the league in scoring at 24.8 points and showed star-like quality that all are betting will be seen again.

• Brandon Roy, Trail Blazers -- Roy didn't play or carry himself like a rookie here, perhaps because he's had more college experience than all the competition. He didn't have as much sizzle as Foye, averaging 19 points, 3.4 rebounds and 3.6 assists, but he looks to have as much upside.

• Maurice Ager, Mavericks -- Only played in three games, but he left his mark. Averaged 20 points and shot the ball extremely well from the outside.

• Andrea Bargnani, Raptors -- The No. 1 overall pick didn't have as great of numbers as others (13.2 points, 3.8 rebounds per game) but they were hindered because he only played eight minutes Friday after suffering what appeared to be a minor back injury. There's no denying his skills and polish, and in three of the four games he played he was exceptional.

• Steve Novak, Rockets -- The second-rounder made the list with some impressive long-range shooting. He nailed 43 percent of his 3-pointers and averaged 16 points.

• John Lucas, Rockets -- He's still considered undersized, of course, but his game isn't. After the way he played here, it would be shocking if the former Oklahoma State star isn't in the league next season. He was second in scoring at 23.4 points and was the assist leader at 7.6.

• Kelenna Azubuike, Nuggets -- Had he stayed in school a year longer and performed at this level he might've been a first-round draft pick this year. He averaged 16.4 points on a sizzling 58 percent shooting. 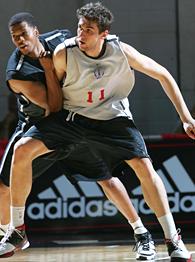 • Brandon Hunter, Cavs -- Another guy who is technically undersized for his position, but he's was always a great rebounder going back to when he led the nation at Ohio University. He averaged 9.6 points and 9.2 rebounds and made the Cavs consider him in their future plans.

Casey Jacobsen, Nuggets -- He averaged 16.4 points in just about 21 minutes a game on 54 percent shooting. He's always been a good shooter, but he attacked the glass and ran the floor well all week.

• Louis Amundson, Kings -- He's not on the market anymore, the Kings appear to have every intention of keeping him now. He averaged 10.4 points and 7.8 rebounds playing at home at UNLV.

• It is pretty rare that there are roster moves between summer league teams, but that happened to undrafted rookie guard Darius Washington. After playing three games for the Rockets, the former Memphis star switched over to the Mavericks summer league team.

Washington was barely getting on the floor with Lucas lighting things up for the Rockets and the Mavs needed another guard after Ager's departure.
Washington played two games for Dallas, averaging 4.5 points.

• Guard Alex Acker was the last player drafted in 2005 but the Piston is working to shed Mr. Irrelevant status. He averaged 18.4 points during summer league, getting nearly 35 minutes a game.

• There was summer league history made Friday when twin brothers Joey and Stephen Graham played against each other. The two guarded each other for much of the game. The Cavs' Stephen scored 13 points and got the win over Joey's 12 points for the Raptors.

• ESPN.com's own Paul Shirley closed summer league with a five-point, five-rebound performance on Friday for the Timberwolves. He averaged 7.8 points and 4.2 rebounds.

Brian Windhorst covers the NBA for the Akron Beacon Journal.