BEIJING -- Yao Ming has declared his foot injury a non-issue ahead of August's World Championship warm-up games against America and Brazil in the southern Chinese city of Guangzhou. 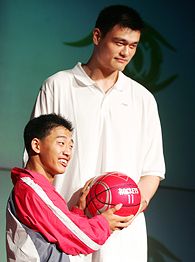 "As to my injury, I don't have any major concerns.
Everything's going really smoothly," Yao told reporters at a
news conference on Friday.

The 7-foot-5 NBA All-Star broke his left foot playing for
Houston Rockets on April 11, putting in doubt his participation
in basketball's international showpiece starting in Japan on
Aug. 19.

Wearing a pair of starched-white basketball sneakers and
walking without a trace of discomfort, Yao said there were no
worries about his recovery.

"Do I look like a guy with a foot injury?" he asked.

Yao's comments followed his appearance at a press conference
launching a series of public service announcements promoting the
Special Olympics to be held in his hometown, Shanghai, in 2007.

As a Special Olympics ambassador, Yao said he was happy to
make a contribution to the Games.

"Society cares for me and I care for society," he said.