DALLAS -- Forget hugs or handshakes or any other goodwill greetings for public consumption.

The predictably unhappy reunion of Mark Cuban and Don Nelson was unhappier than anyone envisioned. 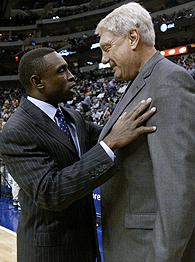 The discord between the Dallas Mavericks' owner and his former coach, which has only deepened since Nelson left the Mavericks' bench in March 2005, was thrust fully into the open Monday night before Nelson's Golden State Warriors scored a 107-104 victory that dropped Dallas to 0-3.

Nelson, who wants to go to arbitration over $6.6 million in deferred compensation he maintains Cuban still owes him, said during his pre-game media session that he "wanted to take the high road the whole way out of here" but that Cuban "hasn't let me do that."

"We're in the situation that we're in," Nelson said, "through no fault of my own."

Cuban countered by leveling several accusations at Nelson, among them his contention that the third-winningest coach in NBA history (1,192-882) quit on the team late in the 2004-05 season but would only resign if Cuban agreed to pay his full $5 million salary in 2005-06.

Cuban also said that the Warriors, who hired Nelson to replace Mike Montgomery on Aug. 30, never asked the Mavericks for permission to speak with the 66-year-old, who was still officially on Dallas' payroll as a team consultant.

The Mavericks have not indicated whether they intend to pursue tampering charges. The Warriors, through a club spokesman, denied Cuban's claim, saying they followed "proper protocol."

"When anybody ever says pay me or I'm not going to quit  that doesn't sit well with me," Cuban said. "That's what Nellie did when he left. He said: 'We both want me to go. I want to go. My heart isn't in it. Pay me and I'll leave. If you don't pay me, then I'll stay  and you'll know where my heart is.'

The Cuban-Nelson relationship -- after they combined with stars Dirk Nowitzki, Steve Nash and Michael Finley to transform the NBA's losingest franchise of the 1990s into a title contender -- began to unravel during the 2003 Western Conference finals.

They clashed over Nelson's reluctance to play Nowitzki again in that series after the perennial All-Star suffered a knee injury in a Game 3 loss to the San Antonio Spurs. The relationship deteriorated further during that off-season, thanks to contentious contract negotiations which ultimately resulted in Nelson agreeing to coach the Mavericks for three more seasons.

Late in Year 2 of that contract, with even Nelson admitting that the club clearly was responding better to assistant coach Avery Johnson and 18 games remaining in the regular season, Nelson and Cuban reached an agreement that would immediately install Johnson as head coach and pay Nelson his full '05-06 salary.

Of course, by that point, Nelson and Cuban were barely speaking to each other. And after Nelson's resignation, he was rarely around the team and almost never seen in Dallas last season as the Mavericks advanced to the NBA Finals for the first time in franchise history. Nelson has since said that Cuban never used him as a consultant, ignored his e-mails and forbade him from attending training camp, practices and from flying on the team plane.

Cuban, who initially proclaimed Nelson to be the Red Auerbach-style "godfather" of the Mavs when Johnson took over, counters by saying Nelson forced management to exclude him because of his negativity.

Before the best season in franchise history, according to Cuban, Nelson let it be known that "we would never make it out of the first round."

"There's other stuff he did that I would never do to anybody," Cuban said. "Particularly to someone I'm supposedly trying to be friends with."

That's among the reasons why Cuban -- who still employs Nelson's son, Donnie, as his president of basketball operations and right-hand man in the front office -- refused Don Nelson's request to be part of the Mavericks' pre-game ceremony Monday night. The Mavs were unveiling the club's first-ever Western Conference championship banner.

"I wish I could go out there and help raise the flag, that would be really nice," Nelson said before tipoff. "Or have a 'welcome back' from Mark. That would be wonderful. But none of those things are going to happen."

Nelson nonetheless went on to call his time with the Mavericks "my best 10 years in basketball" since his playing days with the Boston Celtics.

"We went from the worst to the best," Nelson explained.

"But I didn't enjoy my last couple of years here, and Mark wasn't enjoying himself either," Nelson continued. "I thought we were going to walk away and be friends forever, but it hasn't worked out that way. It's unfortunate, but that's the way it is."

Nelson received warm applause when introduced to an American Airlines Center sellout crowd during pregame introductions. Cuban clapped during Nelson's introduction and insisted that he wouldn't rule out sharing a beer with the coach someday.

Yet it's clear that, no matter what happens in arbitration, Nelson will not be getting the open-door treatment Cuban proudly extends to Mavericks alumni any time soon.

"I'm just sick and tired of hearing this nonsense [from Nelson] that, 'Everybody likes me but Mark, I tried this, I tried that [to repair the relationship],' " Cuban said. "C'mon, Nellie. We know what it is. History repeats itself over and over and over again. There's nothing new here."

Cuban was referring to Nelson going to arbitration with Warriors owner Chris Cohan -- and winning $1.6 million from Cohan -- after Nelson's first Golden State stint ended in 1995. Cohan agreed to rehire Nelson in the off-season after the Warriors' playoff drought was stretched to 12 consecutive seasons.