Doc Rivers' job security has been the subject of much speculation, but at least the Boston Celtics coach has the endorsement of his boss. 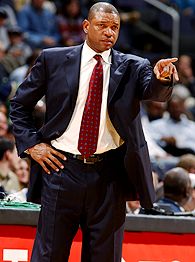 Executive director of basketball operations Danny Ainge said Saturday that Rivers would finish the season in his current position, regardless of the outcome.

"The way I look at is, when I was a player when we lost, there were always things I felt I could do better to make our team better," Ainge said, according to the Boston Globe. "When I was a coach, I felt there were always things I could do that could have gotten us over the hump that night. It's no different than here. I always feel there's things I can do better, things I need to keep trying to do to get better to help us win to get us over the top."

The Globe said that Ainge was asked directly if Rivers would remain the team's coach throughout the year even if the Celtics lost the rest of their games, to which Ainge replied, "Yes."

Even though Boston has struggled this season, postseason hopes are certainly not out of the question in the wide open Atlantic Division. The Celtics are in fourth place at 6-13 but trail the first-place Nets by only one game after beating New Jersey 92-90 on a buzzer-beater by Paul Pierce on Saturday.

Ainge also suggested that some of the blame for the team's poor performance is misplaced.

"Absolutely, I accept responsibility for what we have on the court," Ainge said, according to the Globe. "But I ultimately place blame on the players because they have to get things done. When I say place blame, it just means there's a lot of things I'm seeing that they need to do better that they're capable of doing.

"I never think our coaches are perfect, that they make every single right decision. That coach doesn't exist. That doesn't exist with the Pat Rileys and the Phil Jacksons and the Don Nelsons."

Rivers is 254-267 for his coaching career in eight seasons with the Orlando Magic and Boston. He is 84-99 in two-plus seasons with the Celtics. Boston finished 45-37 in 2004-05 -- Rivers' first season there -- and lost in the first round of the playoffs to the Indiana Pacers. The team finished 33-49 last season, seven games out of the final playoff spot, as grumblings about Rivers' performance began.

"[All coaches will] tell you that they make mistakes," Ainge said, according to the Globe. "But what I'm saying is ... it's not about the result of the game. It has a lot more to do with what I see every single day happening within the organization. That evaluation process is different than the average fan and the media. And I know that."