• June 1996: Iverson is drafted with the first overall pick of
the NBA draft by the Philadelphia 76ers.

• May 1997: Iverson is Rookie of the Year after averaging 23.5
points, including a 50-point game against Cleveland. 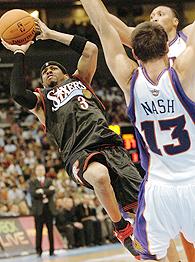 • August 1997: Iverson is arrested on drug and gun possession
charges after the car he was riding in was pulled over for speeding
in Virginia. He was sentenced to probation and 100 hours of
community service.

• July 1998: Two of Iverson's friends in Virginia borrowed his
Mercedes and were pulled over on drug charges. Iverson was not
charged.

• April 2001: A year after being nearly traded, Iverson wins his
second scoring title and is named league MVP after averaging 31.1
points. He leads the Sixers to the NBA Finals, where they lost to
the Los Angeles Lakers.

• November 2001: Already in the middle of a 10-year, $50 million
endorsement deal, Iverson signs a lifetime contract extension with
Reebok.

• October 2002: Rashan R. Langeford, a friend of Iverson who had
been in his wedding, is shot and killed in Virginia. Iverson wears
a black armband in his honor and taps it before every free throw.

• May 2002: After being eliminated in the first round of the
playoffs by the Boston Celtics, Iverson holds a press conference in
which he lashes out at critics complaining about his practice
habits. "I'm supposed to be the franchise player and we're in here
talking about practice," he said, becoming more incredulous as the
interview went on. "Not a game, we're talking about practice. How
silly is that?"

• July 2002: Iverson allegedly threatens two men with a gun while
looking for his wife following a domestic dispute. All 14 counts
against him are later dropped or dismissed.

• May 2003: Sixers coach Larry Brown, who frequently clashed with
his mercurial star, resigns from the club to coach the Detroit
Pistons. Brown is replaced by Randy Ayers, who is fired midway
through the next season.

• September 2003: Iverson agrees to a $76 million contract that
would keep him in Philadelphia through 2009. "I always wanted to
be a Sixer," Iverson said at a news conference. "I always wanted
to finish my career as a Sixer."

• March 2004: Told he would not start against the Detroit Pistons
after recovering from a knee injury, Iverson refuses to come off
the bench and instead sits out the game.

• April 2004: Under Ayers and interim coach Chris Ford, the
Sixers miss the playoffs for the first time since the 1997-98
season. Jim O'Brien becomes the team's third head coach since
Brown's departure less than a year earlier.

• December 2004: Iverson scores 54 and 51 points on consecutive
nights against Milwaukee and Utah.

• February 2005: Iverson scores a career-high 60 points in a
112-99 win over the Orlando Magic. "This is the greatest
performance I've ever witnessed," O'Brien says.

• February 2005: Iverson denies a report that he wants to be
traded. "I want to be right here," he says. "If I could have a
wish, I would wish it's the last time I have to say that. I would
wish people would know this is where I want to be." 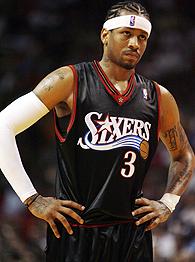 • May 2005: O'Brien, who became unpopular with his players, is
fired just one season into a three-year contract. He is replaced by
former 76ers guard Maurice Cheeks. "I wanted Maurice Cheeks to be
the coach and now it's finally here," Iverson would say later. "I
feel like in the 10 years that I've been playing, the atmosphere
should have always been like it is."

• April 2006: Iverson averages 30.7 points and 7.9 assists and
captures his fourth scoring title. He caps arguably his finest
season by being late to "Fan Appreciation Night" at the team's
final home game. Iverson and teammate Chris Webber, who were both
late to the game because of injuries, later apologize.

• July 2006: After being the subject of trade rumors leading up
to the draft, Iverson says he wants to remain a 76er but would
accept a trade if he's not wanted in Philadelphia. "I want to be a
Sixer, I have said that since Day One," he said. "But if I am not
wanted, then I definitely don't want to be a Sixer and I am willing
to start my career all over."

• October 2006: Iverson admits he and other players abused
Cheeks' easygoing personality the previous season en route to a
38-44 record, but the guard vows not to let it happen again.

• Nov. 29, 2006: Iverson skips a bowling night with season ticket
holders and other VIPs, drawing a fine from the team. Iverson later
blames his absence on medication he was taking after having two
abscessed teeth pulled.

• Dec. 6, 2006: Iverson heads to the locker room for the fourth
quarter of a 121-94 loss to the Chicago Bulls. The reason given for
his leaving the game is back spasms.

• Dec. 8, 2006: Iverson is told by the team not to attend that
night's game against Washington. Iverson releases a statement that
reads in part, "As hard as it is to admit, a change may be the
best thing for everyone." Ed Snider, the chairman of
Comcast-Spectacor, the team's owners, says Iverson will be traded
and has likely played his last game as a Sixer.

• Dec. 11, 2006: Iverson's locker is cleaned out and his nameplate removed. Yet the Sixers' PR staff still refers to it as "his locker."