DENVER -- George Karl blasted Knicks coach Isiah Thomas for
his role in the brawl between New York and the Nuggets, calling him
a "jerk" who acted despicably by blaming Denver for the fight.

"He should be accountable for what his actions are," Karl
said. 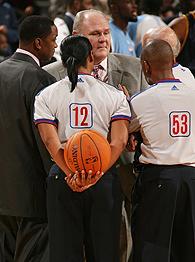 Karl was livid with Thomas for telling Carmelo Anthony not to go
into the lane in the final minute-plus of the Nuggets' 123-100 win
at Madison Square Garden on Saturday night. Ten players were
ejected after Mardy Collins' hard foul on J.R. Smith started the
fight.

Karl also said Thomas' actions "after the game were
despicable."

"There's no question in my mind it was premeditated," Karl
said in an obscenity-laced news conference on Denver's practice
court Monday morning. "He made a bad situation worse. He's a jerk
for what he's trying to do."

Thomas maintained that it wasn't what he said or didn't say to
Anthony, but Karl's actions at the end of the game that may have
instigated the brawl. Thomas felt Karl should've taken his starters
out before the Nuggets were up nearly 20 points.

"I can't speak for him, but he put his players in a tough
situation," Thomas said Monday morning. "I'm not here to place
blame -- we all shared in it."

When informed that Thomas wasn't suspended by the league for his
role, Karl just shook his head. He lost his two leading scorers
when commissioner David Stern handed out the suspensions -- Anthony
for 15 games and Smith for 10 games.

"If that's the truth [about Thomas] then there's no question it
was wrong," Karl said.

Stern said he'd talk to the Nuggets' organization about Karl's
comments regarding Thomas.

"We believe that the heat of the moment allows certain
overstepping of traditional bounds," Stern said. "We understand
that we've got some original characters among our coaching staff
and we allow a one-time outburst. But over time we have to realize
that a lot of people are watching us, many of them young."

Karl and Thomas already had tension in their relationship over
the way Larry Brown was fired by the Knicks. Karl and Brown are
close friends.

But Thomas said he didn't mean to provoke anything Saturday.

"I just said to those guys [Anthony and Marcus Camby] that this
isn't a way that you should act," Thomas said. "You shouldn't be
rubbing it in, but it wasn't a threat. It was more like this isn't
how you do it. It wasn't necessarily not to go to the basket but
basically don't rub it in."

Karl claimed he wasn't doing that by leaving his starters in the
game.

"Where were we running the score up?" he said. "He had the
same team in the game that pressed us and trapped us and cut a
25-point lead to 10 in about two minutes. Same team. Same pressure.
Same 3-point shooters. Exact same. He didn't throw in no towel. He
didn't take his best team off the court and say, 'Hey, the game's
over.' He never gave one [darn] signal to it. It's absurd."

Karl said he's seen big leads by the Nuggets evaporate before
and wanted to guard against it. After losing three of the first
four on the road trip, Karl wanted to make sure the Nuggets put the
win away.

"My team has blown 10-point leads, 11-point leads with two
minutes to go," Karl said. "I watched Utah blow a 12-point lead
to Sacramento two nights before that with four minutes to go in the
game and you're telling me that I'm running the score up?"

Karl fumed for a few seconds longer and then ended his news
conference.