The Grizzlies' career winningest coach, Fratello had a 95-83
record and had guided Memphis to consecutive playoff appearances.
Tony Barone Sr., the Grizzlies' director of player personnel, was
selected to be the interim coach. 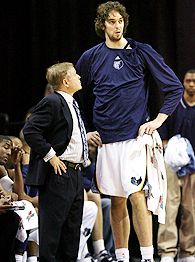 Fratello started the season without All-Star center Pau Gasol, who broke his foot this summer in the world championships and missed the first 22 games.

"Unfortunately, this season has been one of disarray starting this past summer," Fratello said in a statement.

"We just felt it was time to make a change and move in a different direction based on our record and future goals. We wish Mike the best in his future endeavors," West said in a statement.

The change was made after the Grizzlies' 112-96 home loss to Milwaukee on Wednesday night, the fifth straight defeat and 11th in 12 games for Memphis.

"In your own homecourt, you're getting booed and yelled at from your own fans," Gasol said after the loss. "It's just hard. There's too many defensive breakdowns right now, and too many easy layups right now. The whole thing is getting to our head, and it's affecting on every aspect of the game."

The Grizzlies started on a youth movement this offseason, drafting Rudy Gay and Kyle Lowry for a more up-tempo pace. They traded veteran Shane Battier and let center Lorenzen Wright leave as a free agent.

But Fratello, who replaced Hubie Brown on Dec. 2, 2004, was criticized heavily for sticking with his deliberate style. He took the Grizzlies to the playoffs the past two seasons, but they were swept in the first round both times.