CHICAGO -- Michael Jordan and his wife, Juanita, filed for divorce Friday after 17 years of marriage.

"Michael and Juanita Jordan mutually and amicably decided to end their 17-year marriage," the couple said in a statement issued through their lawyers. "A judgment for dissolution of their marriage was entered today. There will be no further statements." 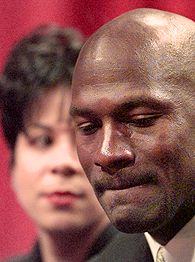 But in court documents filed Friday with the Lake County Circuit Court, the couple said "irreconcilable differences have caused an irretrievable breakdown of the marriage." The couple said attempts to reconcile their marriage had failed and future ones "would be impractical and not in the best interests of the family."

Juanita Jordan previously filed for divorce in January 2002 but withdrew her petition a month later when the couple announced they were attempting a reconciliation.

The couple met at a Chicago restaurant during his second season with the Bulls and were married Sept. 2, 1989, in Las Vegas. They have three children: Jeffrey, 18, Marcus, 16, and Jasmine, 14.

The Jordans, who have lived separately since February, will share custody of their children, according to court documents.

"The co-petitioners acknowledge that although their marriage is ending, they desire to resolve all of the issues surrounding the dissolution of marriage in the most amicable, expeditious and private fashion possible, for the benefit of themselves and their children," the documents read.

Jordan, a part-owner of the Charlotte Bobcats, led the Bulls to six NBA titles and was a five-time league MVP.