MIAMI -- Pat Riley is taking a break from a season that has
left him limping and in pain.

The Miami Heat coach began an indefinite leave of absence
Wednesday because of hip and knee problems, choosing assistant Ron
Rothstein to fill his spot on an interim basis. 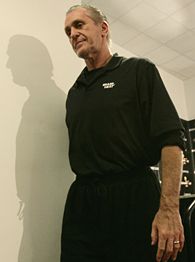 Riley will have surgery Friday to remove floating chips in his
right knee. Surgery on his hip, the malady that hurts him most now,
is not yet scheduled. The 61-year-old coach doesn't know how long
he'll be out.

"I'm going to be displaced for a while, but not disconnected at
all," he said.

Miami's record fell to 13-18 on Wednesday after a 110-95 loss to the
Los Angeles Clippers. Already this season, the Heat have seen Shaquille O'Neal, Dwyane Wade and Jason Williams -- perhaps the three biggest
keys in last year's championship run -- miss many games with
injuries.

And now it's Riley's turn.

"We have a championship team that is sideways right now, so
this is going to be a great challenge," Riley said. "Keep your
notebooks open. We'll see how it plays out."

Riley, who also is the Heat president, is in his 12th season
with the organization and 10th year as its coach. He resigned as
coach shortly before the 2003-04 season, then returned to the bench
in December 2005, replacing Stan Van Gundy and postponing right hip
replacement surgery.

In September, Riley said he didn't expect to need the operation
this season, but the pain has apparently worsened in recent weeks.
He considered surgery during the summer, then simply decided
against it.

"I'm just tired of the pain and the medication," Riley said.

Riley was asked if the knee injury, or its severity, stems in
any way from the time last week when he allegedly kicked a locker
room door following a loss in Chicago.

"What I do in the locker room really has always been my
business," Riley said.

"Typical Riles," Mourning said. "All the years that he's
coached me I've seen him tear a lot of things up."

Rothstein was the Heat's first head coach in the 1988-89 season
and lasted three years with the expansion franchise, finishing with
a 57-189 record. His last full stint as an NBA head coach was with
the 1992-93 Detroit Pistons, a team he guided to a 40-42 record,
and he filled in for Riley for the final two games of last season
while the coach visited his ailing mother.

"Listen, I haven't been in the first chair in an NBA game since
1993," said Rothstein, who also coached the WNBA's Miami Sol for
three seasons. "Coaching the WNBA was a totally different story. I
don't mean to demean that at all. But this is different. So, I'm
sort of curious to see how I'll feel and how I'll handle it."

Riley's frustration has grown as the Heat have struggled this
season, remaining mired below .500. Plus, on Wednesday he
deactivated forwards Antoine Walker and James Posey because neither
met a Jan. 1 deadline for a team conditioning goal regarding body
fat.

But he said Wednesday the team's record did not factor into his
decision to temporarily step aside now.

"We've had defensive lapses that are mind-boggling to me,"
Riley said. "The offensive output will be corrected when Shaq and
Dwyane and everybody's healthy. I don't think there's been any
question about that. But I haven't been happy with our overall
effort and defense all year long."

The Heat haven't had their preseason projected starting five
together for any games yet this season because of all the injuries.

"We're all frustrated that we're not doing as well as we're
supposed to be doing," O'Neal said. "But there's a lot of iffy
factors involved with that. Very soon, everybody will be back.
That'll be the day we're looking forward to."

Wade, last season's finals MVP, was expected to miss his third
straight game Wednesday because of a sprained wrist. A six-game
Western swing begins Friday in Phoenix and the team hopes to get
O'Neal back by the end of the trip.

"I haven't been happy about the situation," Riley said. "I
don't think anybody is. I hope that when everybody gets healthy,
including myself, it'll rectify itself."

Riley has a career record of 1,164-607, including Wednesday's
loss, which counts against him. Last season's title run
was vindication for Riley, who made sweeping roster changes after
the 2005 playoffs. The championship was Riley's seventh and his
fifth as a head coach, but his first since 1988 with the
Showtime-era Los Angeles Lakers.

Riley has said he gets plenty of mail about how to handle the
hip problem, including one package in which someone sent him an
artificial hip and explained how it works. Last fall he described
his exercise regimen as "not intolerable."

Other marquee coaches have dealt with similar issues in recent
years. Larry Brown missed 17 games with the Pistons two seasons ago
following hip surgery, and Lakers coach Phil Jackson missed about a
month before the start of this season after his hip was replaced.

But, Riley cracks, that's no indication of how long he'll be
out.

"I'm tougher than those guys," he said.