CLEVELAND -- His royal image is being tarnished with almost
every trip to the foul line. From 15 feet, LeBron James has become
the King of clang. 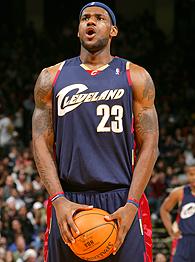 In his last 10 games, Cleveland's All-Star forward has made just
59 of 98 free throws, Shaq-like statistics that have dropped his
average from the line to 68 percent -- 7 points below his career
average.

This is a disturbing trend for James and the Cavaliers, who have
been the NBA's worst free-throw shooting team (68 percent) most of
the season. Until the team starts making more fouls shots they will
continue to blow leads and give away victories. Not exactly the
stuff of a title contender.

James is determined to fix the biggest flaw in his otherwise
impeccable game.

"I'm just trying to make them," he said. "I've shot in the
high 70s my whole career and in the 80s in high school. It has
never been a problem for me, and it's not going to be a problem
now. I just have to go up there and make them."

James, just 20-for-38 in his past five games, has spent extra
time after practice working with Cavaliers assistant coach Chris
Jent on his poor foul shooting. Jent has made some fundamental
adjustments to James' shot, but so far the results aren't showing.

"We're just trying to change how much time he is at the line,
make it more of a rhythm shot," Jent said. "We haven't done much
more than that, it's him trying to find a comfortable routine.

"Free-throw shooting is so much mental that the routine part of
it is important so your body feels comfortable. Right now, we're
trying to find that comfort level and sometimes when that happens,
you regress before you progress. For him, it's kind of a hard time
right now."