In a groundbreaking revelation that began to reverberate around the NBA on Wednesday, former player John Amaechi has become the first professional basketball player to openly identify himself as gay. 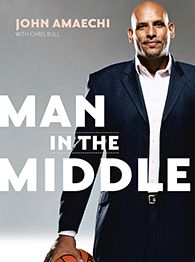 Amaechi, who played at Penn State and spent five seasons in the NBA with Orlando, Utah and Cleveland, comes out in an upcoming book entitled "Man in the Middle" to be released later this month by ESPN Books (owned by the Walt Disney Company, parent company of ESPN).

Martina Navratilova, perhaps the most famous openly gay athlete in the world, praised Amaechi's decision and said it's imperative for athletes to come out because of what she called an epidemic of suicides among young lesbians and gays.

"It's hugely important for the kids so they don't feel alone in the world. We're role models. We're adults, and we know we're not alone but kids don't know that," she said. "He will definitely help a lot of kids growing up to feel better about themselves."

Former NFL running back David Kopay came out in 1977; offensive lineman Roy Simmons and defensive lineman Esera Tuaolo came out more recently. Glenn Burke, an outfielder for the Los Angeles Dodgers and the Oakland Athletics in the 1970s, and Billy Bean, a utility player in the 1980s and 1990s, have also come out. Former major-league umpire Dave Pallone has also said he is gay.

Burke died of complications due to AIDS in 1995.

"What John did is amazing," said Tuaolo, who came out in 2002. "He does not know how many lives he's saved by speaking the truth."

Tuaolo said coming out would be a relief to Amaechi.

"Living with all that stress and that depression, all you deal with as a closeted person, when you come out you really truly free yourself,'' Tuaolo said. "When I came out, it felt like I was getting out of prison."


Amaechi, a 6-foot-10 center, averaged 6.2 points and 2.6 rebounds before retiring from the league in 2003 after his contract was traded from Houston to New York. He never played for the Rockets or Knicks. He is currently known in Britain as a television personality and for helping fund the Amaechi Basketball Center in Manchester.

In the book and in an in-depth interview with ESPN's "Outside The Lines" to be shown Sunday, Amaechi speaks and writes candidly about his pro career, his relationships with teammates and coaches and how he began to live more openly gay while he was playing for the Jazz -- frequenting gay clubs, both in Salt Lake City and in other NBA cities.

In the book and in his interview, Amaechi called Jazz owner Larry Miller a "bigot," said former teammate Karl Malone was a xenophobe and said coach Jerry Sloan "hated" him.