MIAMI -- Dwyane Wade is considering season-ending surgery to repair his dislocated left shoulder, which would be the biggest loss yet for the Miami Heat during their rocky reign as NBA champions.

The All-Star guard was hurt in the fourth quarter of Wednesday night's 112-102 loss at Houston. Wade flew home early Thursday in a private plane and was examined at a hospital by team physician Dr. Harlan Selesnick, who conducted a battery of tests. 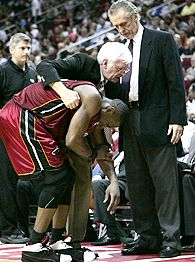 "Wade is presently weighing his treatment options provided to him by the Heat medical staff," the team said in a statement. "Wade still needs to discuss these options with his family and Heat president and head coach Pat Riley, and will then decide what course of action to take."

Regardless of the decision, the Heat's bid to repeat was further weakened. They may be hard-pressed to merely make the playoffs.

The injury stung especially hard because it came in the first game in which Wade, Riley and Shaquille O'Neal have been together since mid-November. Plagued by health issues much of the season, the Heat had won seven of eight games to reach .500, their best record since they were 3-3, and appeared ready to surge into the playoffs.

Instead, they went into Thursday's NBA Finals rematch at Dallas missing their leading scorer and five games behind Washington in the Southeast Division with 29 to play. At 26-27, Miami had the eighth-best record in the East and was two games out of ninth place.

The top eight teams in the conference qualify for the postseason. Only once since 1970 has the defending NBA champion failed to make the playoffs -- Chicago in 1999.

"You don't know how this whole thing is going to play out," Riley said. "We'll have to play with a sense of urgency."

O'Neal said he's not yet projecting playoff seedings, but in Wade's absence, he said it's time for him to become more active.

"I'm going to start playing really aggressive," he said. "Hopefully I'll get more looks and get more touches and be able to keep everyone involved."

O'Neal, who turns 35 next month, is still rounding into form after returning Jan. 24 from knee surgery. He had 20 points and 16 rebounds in 27 minutes Wednesday.

"If we can get Shaq to play the way he did tonight, we will be in pretty good shape," Riley said.

"We have to keep the big fellow going," forward James Posey said.

Even with O'Neal as another option on offense, Wade leaves a huge void. The MVP of last season's NBA Finals is third in the league in scoring with an average of 28.8 points.

"He's the one we look to to take shots," center Alonzo Mourning said. "Guys are going to take up the slack. We've got guys in here who have been in those roles before, so when our number is called, we've got to produce, plain and simple. We've got to do everything a little bit better now."

Wade was on defense when his left arm collided with Houston's Shane Battier and awkwardly stretched back. Wade walked off the court hunched over in pain and sat on the bench in tears as his shoulder was examined. He then left in a wheelchair and went to a hospital by ambulance.

Wade bruised the same shoulder in a game Feb. 13 but played in the All-Star Game Sunday.

For the Heat, Wade's departure was all too familiar. He already had missed seven games this season, O'Neal has been out 39 games, and starting point guard Jason Williams has missed 20.

In addition, Riley returned this week after been sidelined since Jan. 3 for operations to replace his left hip and repair cartilage in his right knee.

"Obviously, injuries are a part of this game," Mourning said. "But it seems as though this year we've been behind the eight ball when it comes to injuries."