SEATTLE -- Spencer Haywood was finally recognized by the
SuperSonics on Monday night for his accomplishments on the floor
and his fight in the courts, 32 years after he last played in
Seattle. 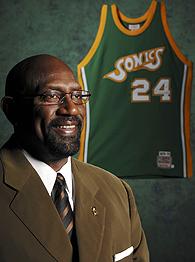 And yet, there was sadness accompanying Haywood's honor.

Haywood's No. 24 was to be retired at halftime of Monday's game
between Seattle and Portland. And while Haywood was proud about the
moment finally arriving, there was sorrow too, following the last
week's death of Dennis Johnson, who also wore No. 24 in his time
with the Sonics.

"For me it's a high, and then it's a little bit of a low
because I know DJ would have loved to have been here," Haywood
said before Seattle played Portland. "He's here in all of our
hearts."

With "24" spotlights shining on the court and a video tribute
playing on the scoreboard, Haywood took the floor with his family
to a standing ovation, and wearing a black "DJ" patch on his
suit. He was presented with gifts before his jersey was raised to
the rafters at KeyArena, between the jerseys of Lenny Wilkens and
Fred Brown.

Haywood brought down the NBA's rule banning the drafting or
signing of a player before his college class graduated. Honoring
him was considered long overdue by many not only for his play in
Seattle, but his landmark court victory that opened the door for
swarms of teenagers to enter the NBA.

"There are a lot of young players that can really thank him. He
was like the Curt Flood of the NBA," said Sonics vice chairman
Lenny Wilkens, who was Haywood's teammate and coach during the
1971-72 season. "He established that, and that's why all these
young men make a lot of money."

Seattle was Haywood's first NBA stop during a sometimes talented
but tumultuous career that included time with the New York Knicks,
New Orleans Jazz, Los Angeles Lakers and Washington Bullets, and
was marred by league ban during the 1980-81 season for drug use.

Monday night's honor by the Sonics was the completion of a long
wait for the 57-year-old.

"I was waiting for a while and then I stopped waiting because I
went through another one of my spiritual awakenings where I
realized that things that came on Spencer's time usually we're kind
of bad," Haywood said. "So I decided to let it come on a higher
power or God's time."

The Sonics signed Haywood on Dec. 30, 1970 to a six-year, $1.5
million contract after the previous season leading the ABA in
scoring and rebounding with Denver, as a rookie. He had spent just
one year at Trindad State Junior College in Colorado in 1967-68,
and then helped the U.S. to a gold medal that summer at the
Olympics in Mexico City.

He immediately challenged the NBA's four-year rule, eventually
winning a U.S. Supreme Court decision 7-2 in March 1971. That
didn't mean Haywood was clear from controversy. Wilkens remembered
going into cities during the 1971-72 season where teams had
received court injunctions banning Haywood from playing.

"It was a lot of adversity at that time. We wouldn't see him
for days cause he'd have to go to court and things like that,"
Wilkens said. "But in the long run we all felt like it was worth
it and I think he proved that."

Haywood was with the Sonics through the 1975 season before being
traded to the Knicks. With Seattle, Haywood averaged 24.9 points,
including a franchise record 29.2 in the 1972-73 season. He was
widely considered the city's first superstar athlete when the
Sonics were the only game in town.

"His impact at the time was huge, because everyone knew about
Spencer Haywood," Wilkens said.

Wilkens was largely responsible for bringing about Monday's
events. He joined the organization as vice chairman in November and
immediately went to work on making sure Haywood became the sixth
player in team history to have their jersey retired.

Despite the impact of his court victory, Haywood said only one
current player has ever contacted him -- Kevin Garnett. On the day
Garnett was named the 2004 league MVP, he thanked Haywood in his
remarks.

"This is a great day," Haywood said. "It's making players
much more aware of what went on and what it was like."