LOS ANGELES -- Clippers point guard Shaun Livingston
dislocated his left knee cap and had to be wheeled off the court on
a stretcher during Monday night's game against the Charlotte Bobcats. 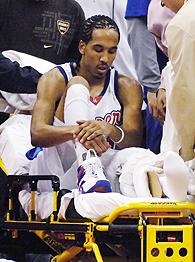 Several media outlets reported he is out for the season.

The three-year veteran was driving to the basket on a fast break
and went up from a layup. He missed the shot and came down hard on
his left foot in a contorted manner and collapsed in obvious pain
as the Staples Center crowd of 18,442 grew hushed. Play continued
for another 18 seconds before Livingston was placed on a stretcher.

"When he landed, I thought it was his ankle," coach Mike
Dunleavy said. "But when he hit the floor, you could see that his
knee was dislocated and he was in tremendous pain."

Livingston remained in the arena for X-rays, which were
negative, then was taken to the hospital for further evaluation.

Dr. Steven Shimoyama, one of the Clippers' team physicians, said
he had to pop Livingston's knee cap back into place to alleviate
the pain.

"The prognosis is still uncertain because we don't yet know the
extent of his injury," the doctor added. "In our preliminary
inspection, it does not appear that he had damage. But you need an
anteriogram [an injection of dye into the arteries in Livingston's
leg] to be sure. Then he'll probably get an MRI."

Livingston, who was picked fourth overall by the Clippers in the
2004 draft out of high school, has been hampered by injuries and
has yet to play a full season in the NBA. He missed 39 games during
his rookie season because of a dislocated right knee, and another
12 that season because of torn cartilage in his right shoulder.
Last season he sat out the first 21 games with a stress reaction in
his lower back.

"I love that kid," teammate Cuttino Mobley said. "It's a
tough thing to happen to him -- not only for the team, but also for
our fans. He is really special."

Livingston, who has been sharing the point guard duties with
37-year-old Sam Cassell, missed two games in January with a
sprained right ankle. He entered the Charlotte game averaging 9.5
points and 5.2 assists. Livingston had a career-high 14 assists in
Saturday's 103-90 victory over the Golden State Warriors.

"He was playing well," Elton Brand said following the
Clippers' 100-93 victory. "He just had one of his best games of
the season against Golden State, so it was really disappointing.
After he got injured, it was on the back of everyone's mind. We
wanted to pull it out, even though it was a downer with Shaun going
down the way he did."