BOSTON -- Even Isiah Thomas paid tribute to Dennis Johnson
on Wednesday night, wearing a pin in honor of the late Celtics
great whose career highlight came at Thomas' expense. 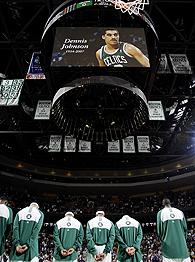 In Boston's first home game since Johnson died of an apparent
heart attack last Thursday, the Boston Celtics honored the
five-time All-Star during their game against the New York Knicks.

A pregame tribute showed video of Johnson's highlights with the
Celtics. The video was accompanied by Green Day's "Good
Riddance," but a standing ovation toward the song's end drowned
out the music.

The Celtics also passed out pins with Johnson's No. 3 to the
first 5,000 fans through the turnstile, had a moment of silence and
continued to show clips of his career throughout the game.

Celtics employees all wore the pins, and former Boston center
Robert Parish and coach K.C. Jones each attended the game to honor
Johnson.

"I was blown away [when I heard the news]," Jones said. "It
was hard to deal with. Being the coach and being close to him, that
was hard to take."

Thomas, now the Knicks' coach, wore a pin even though his errant
pass in the fifth game of the 1987 Eastern Conference finals led to
the biggest play of Johnson's career.

Larry Bird stole Thomas' inbounds pass under Boston's basket and
fed Johnson, who drove in for the winning layup. Boston won the
series in seven games, but lost to the Los Angeles Lakers in the
NBA finals.

"He was not only clutch offensively, but defensively also,"
Parish said. "He got the big rebound, got the big steal, got the
big defensive stop. Whatever we needed, D.J. always found a way to
get it done."

Johnson, who won two NBA championships with Boston and another
with Seattle, died Thursday after collapsing following practice
with the Austin Toros, the NBA Development League team coached. He
was 52.

A five-time All-Star and one of the most feared defensive guards
in NBA history, Johnson spent 14 seasons in the league and retired
after the 1989-90 season at the age of 35.

He was hoping his stop in Austin, Texas, would lead to a head
coaching job in the NBA.

"I don't know why no one grabbed him," Jones said. "I was
here with him when he was an assistant, and I was in awe of how he
dealt with the players. He always had a smile, but knew what to
say. He knew how to deal with the players."

It was the second time this season the Celtics paid tribute to a
franchise legend.

Former coach Red Auerbach died on the eve of the season, and
Boston paid tribute to him during the home opener.