SACRAMENTO, Calif. -- Sacramento Kings forward Ron Artest
was arrested Monday and excused indefinitely from the team after a
woman said he shoved her to the floor inside his home and prevented
her from calling 911. 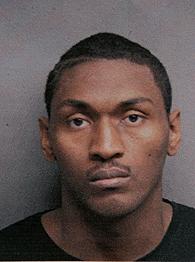 Placer County sheriff's authorities said the woman reported she
and Artest were arguing inside the home Monday morning when he
pushed her. The argument moved outside when Artest tried to leave
in his Hummer, sheriff's Sgt. Andrew Scott said during a news
conference.

"It resulted in some pushing," Scott said of the argument.
"Mr. Artest had shoved the victim to the floor several times, then
he attempted to leave."

The woman threw a pot at the Hummer, shattering its windshield,
Scott said. He would not disclose the woman's relationship with
Artest but said a 3-year-old girl was inside the house during the
incident.

But a neighbor who witnessed part of the altercation told The Sacramento Bee that the woman involved in the incident was Artest's wife, Kimsha Artest.

Deputies arrived around 9:30 a.m. at Artest's five-acre estate
in the Sacramento suburb of Loomis and arrested him on suspicion of
domestic violence, sheriff's spokeswoman Dena Erwin said. He also
was arrested on suspicion of using force or violence to prevent the
woman from reporting a crime.

"He was very cooperative," Scott said of Artest, found sitting
calmly outside the home. "He gave no problems to any of the
officers on scene."

Artest, the central figure of the infamous 2004 brawl between
Indiana Pacers players and Detroit Pistons fans, was booked into
the Placer County Jail and released later on $50,000 bail. His
arraignment is scheduled for March 22.

Sheriff's deputies have been called to Artest's home at least
once before, but there were no arrests, Erwin said.

Geoff Petrie, the Kings' president of basketball operations,
said the team was removing Artest from the team, pending a full
investigation.

"The Kings have excused Ron Artest indefinitely from any
further participation with the team due to his arrest today for
domestic violence," Petrie said in a statement.

Team spokesman Troy Hanson told The Associated Press that Artest
had not been suspended and still was being paid.

An emergency protective order obtained by sheriff's officials
prevents Artest from returning to his home or contacting the woman
until she can obtain a restraining order. Scott said this was
normal procedure.

Sheriff's officials said the woman had injuries but would not
describe them. She declined medical treatment.

Artest, who joined the Kings from the Indiana Pacers in January
2006, has had previous run-ins with police.

He was at the center of the Nov. 19, 2004 brawl between Pacers
players and Pistons fans at The Palace in Detroit. Just when a
confrontation between players seemed to be over, Artest, lying on
the scorer's table, was hit with a cup filled with an icy beverage.
He bolted into the stands in a rage, followed by fist-swinging
teammate Stephen Jackson. Artest and teammate Jermaine O'Neal later
slugged fans on the court.

Two days later, Artest was suspended for the rest of the season
-- 73 games, plus the playoffs -- in a move that cost him almost $5
million.

Artest and Jackson were sentenced to one year of probation and
60 hours of community service after pleading no contest to
misdemeanor assault charges. In January, Artest was released from
that probation.

Artest has spent nearly 14 months with Sacramento since the
Kings acquired him in a blockbuster trade for fan favorite
Peja Stojakovic. His short tenure is following a familiar script for the
volatile former St. John's star: Initial excitement and outstanding
play, followed by disinterest, distractions -- and now, more legal
trouble.

In early February, it was revealed that Artest paid $1,942 in boarding and impound fees because some of his dogs had spent a total of 77 nights at the Placer County pound since July. Animal control officers had gone to Artest's five-acre estate seven times in that period in response to callers' complaints about dogs being loose or not being fed.

In 2004, Artest completed anger management for a domestic violence charge, and the mother of his children was charged with the same crime for hitting Artest in 2002.

Other Kings have had trouble, as well. New coach Eric Musselman
pleaded no contest in January to driving under the influence of
alcohol after an arrest in October. He was ordered to pay $580 in
fines and penalties and spend 48 hours on a work project.

Last season, Artest guaranteed the then-struggling Kings would
make the playoffs shortly after he arrived, and they surged to the
No. 8 seed and an impressive performance in a first-round loss to
San Antonio.

Artest's dogged defense and passion fit in well with
Sacramento's devoted fans, who adopted him as a community favorite.

This season hasn't been as easy for Artest, who's averaging 18.7
points and 6.6 rebounds while the Kings struggle at 27-32.
Sacramento, which hosts Artest's former Indiana teammates on
Tuesday night, has battled poor team chemistry and inconsistent
play under Musselman.

Though Artest had been a model teammate in his abbreviated first
season, he sparked controversy two months ago by indirectly
criticizing Mike Bibby's defense. Artest also missed a handful of
games with a knee injury that came as news to the Kings -- and last
month, he sat out of the Kings' visit to Indiana for undisclosed
personal reasons.

The Kings were rumored to be exploring trades for Artest but
didn't make a deal at last month's trade deadline.

Sacramento has won its last three games, with Artest playing
well in road victories over Portland and the Los Angeles Lakers --
after shaving the word "Kings" into the back of his head.