ARDMORE, Pa. -- Even in the stuffed halls of his former high school, where he is fervently pursued by wide-eyed students with pens and cell phone cameras in hand, Kobe Bryant can feel at ease. 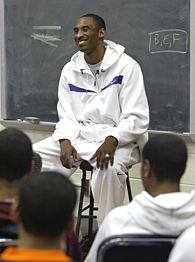 At Lower Merion High School, Bryant is not the former accused rapist with a tarnished public image, the player who ran off Shaq, or even a "HOMETOWN ZERO" -- which the Philadelphia Daily News blasted over his photo on the back page of Friday's paper.

Bryant is still the most popular guy around at Lower Merion High, in the Philadelphia suburbs, and his trip back Friday before the Lakers played the 76ers sent the student population into a frenzy not unlike when he led the 1996 basketball team to a state championship.

"It brings me back to where it all began, before everything got started," Bryant said.

The Los Angeles Lakers star took softball questions, flashed a warm smile during a pep talk and visited with old teachers when he wasn't tailed by a growing mob of students astonished that the All-Star had dropped by just to say hello and "smell the gym."

One message he wanted to get across: Philly and Lower Merion is always in his heart.

"It's always been there," Bryant said. "Since I've been playing in the NBA, I always come back. Always. I'll never forget what the school has done for me, what the city has done for me."

While the students love him, the relationship between Philly fans and Bryant has been strained ever since the 2001 NBA Finals against the Sixers when he said he was "coming to Philly to cut their hearts out." That began an unforgiving attitude from the often-brutal, always-booing Sixers fanatics that's lasted to this day.

When commissioner David Stern presented Bryant with the All-Star
game MVP trophy in 2002 in Philadelphia, the boos were long and
loud and he later said he was hurt. Bryant's been booed ever since,
and Friday night was no exception with jeers filling the Wachovia
Center for pregame introductions, even as fans stood behind the
Lakers bench snapping pictures.

"I don't think that's ever going to fully change," said Bryant's high school coach, Gregg Downer. "I do know that if he played for the Sixers, he'd be worshipped."

Bryant walked from the band room to another part of the school, then a classroom and eventually the boys' locker room, where he gave the varsity team a private talk. He may as well have been handing out the answer key to the SAT, some lifetime hall passes and iPods the way the students swarmed him, screaming "We love you, Kobe!"

"What's up, y'all? Aren't you supposed to be in class right now?" he told a large group.

Bryant, who spent eight years of his childhood in Italy before returning to go to high school, joked he wasn't exactly a model student.

"I didn't take any notes, which got me in trouble quite often, but I was pretty good at remembering things," Bryant said.