MIAMI -- Seeing Dwyane Wade drive toward him during a
scrimmage Monday, Dorell Wright backed away, taking every
precaution not to hit his superstar teammate's still-healing left
shoulder. 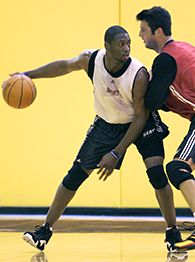 Wade was not happy about that.

"Dorell is a great shot blocker. I saw him look at me and just
jump out of the way," Wade said. "I told him, 'Ain't nothing
wrong with my body.'"

Wade began trying to prove that Monday, when he returned to
practice with the Miami Heat nearly six weeks after suffering the
dislocation that threatened to end his season. He worked out
on-court for 90 minutes, absorbing some contact for the first time,
and followed that with weights and physical therapy.

Most importantly, he was pain-free, another sign he'll be able
to start playing games before the playoffs.

"The fact that he's back practicing is huge," Heat coach Pat
Riley said. "You go back to Feb. 23, it didn't look like there was
going to be any of that stuff. So this is great."

Wade thought so, too.

The reigning NBA finals MVP was smiling and relaxed after his
on-court work, even acknowledging that he may play in more
regular-season contests than the "a game or two" plan he offered
Sunday when announcing he'd return to practice.

For now, there is no timetable. Wade eventually will set one in
consultation with the Heat medical staff and his physical
therapist.

Miami (39-34) has nine games remaining in the regular season,
one that'll be undoubtedly remembered for a plethora of injury
woes. Heat players have missed 171 games this year with injuries,
66 of those by their best two weapons, Wade and Shaquille O'Neal,
who've been together for only 13 starts all year.

Soon, that total will almost surely begin rising again, now that
Wade's return is getting closer.

"Just happy to see him out there running and smiling," Heat
guard Eddie Jones said. "I think it's a great thing to have guys
together again."

Wade was averaging 28.8 points when he was hurt in a collision
with Houston's Shane Battier on Feb. 21. The Heat are 13-7 since,
are a half-game behind Washington in the Southeast Division and
play a huge game against Toronto -- a team Miami is chasing for
home-court advantage in the first playoff round -- on Tuesday.

Should Miami beat the Raptors, it'd hold the tiebreaker by
winning the season series 2-1. Should Miami lose, the Heat would
essentially fall four games (three in the standings, one more with
the tiebreaker) behind Toronto with eight games left, meaning
chances of earning home-court for Round 1 would be slim.

"It's a big game, there's no doubt," Riley said. "Our guys
understand it. We know what it's about. ... It's all about
positioning and seeding and home-court advantage. They know it's
huge."

Wade won't play on Tuesday, but the defending NBA champions may
get Jason Kapono back in the lineup.

Kapono, the NBA's leading 3-point shooter, hasn't played since
spraining his left ankle against Atlanta on March 5. The team will
decide his status after Tuesday morning's shootaround.

Wade is hoping to say the same soon. He'll travel with the Heat
to Cleveland and Boston later this week so he can continue
practicing and "learning the plays again," as he put it, and will
continue rehabbing the shoulder daily to keep building strength.
"I haven't had a day off," Wade said.

Wade's biggest challenge right now, he said, is denying his
risky instinct of reaching for every ball that he comes near
defensively and instead using his feet to get into better position.
But his explosiveness was still there on the offensive end, proven
by the way he ended a 4-on-4 scrimmage with a strong dunk.

"He looked real good to me," Wright said. "He's got all the
moves. Nothing's changed. He's probably just a little winded, I
bet, sitting out that long. But he's been working hard every day,
trying to get back."