MIAMI -- Dwyane Wade is back on the floor with the Miami
Heat, just in time for the defending NBA champions to begin gearing
up for the playoffs.

Wearing a black sleeve to help protect his dislocated left
shoulder, Wade returned to the Heat lineup against Charlotte on
Sunday, playing for the first time since suffering the injury on
Feb. 21 and missing 23 games. 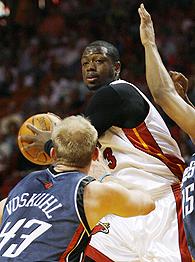 He entered with 3:58 left in the first quarter, was met with a
high-five from teammate Eddie Jones, and fans roared when he rose
from the bench to check into the game. He scored his first point
with 53.9 seconds left in the period, making the second of two free
throws.

Wade has been rehabbing for about a month and returned to
practice with the team last week. Dorell Wright was inactive,
making room for the reigning NBA finals MVP on the active 12-man
roster.

Shortly before taking the court for warmups, Wade was smiling
broadly outside the Heat locker room as several teammates rubbed
his head. After running onto the floor pregame, Wade waved at a
courtside fan who held up three fingers in a nod to his jersey
number.

He missed six weeks -- and since season-ending surgery seemed like
a viable option in the days immediately following the injury, the
Heat had to have been thrilled to get him back so soon.

The Heat held a walkthrough session about two hours before
tip-off against the Bobcats. Wade participated in that and, shortly
afterward, the team decided to place him on the active list for
Sunday.

Wade was not available for comment before the game, and Heat
coach Pat Riley said in his pregame availability that Wade would be
a "game-time" decision.

"When he comes back, he's going to be a player," Riley said
Sunday.

A week ago, Wade said that he hoped to play in "a game or two"
before the playoffs open on the weekend of April 21, but later
suggested that he would like to play in more games -- provided his
shoulder responded well to practices and contact.

Without Wade, the Heat rallied from a team on the playoff bubble
to one in control of the Southeast Division race; they entered
Sunday three games ahead of reeling Washington for the division
title. Miami was 16-7 since Wade got hurt, including a nine-game
winning streak.