INDIANAPOLIS -- The Indiana Pacers have had plenty of off-the-court troubles in the past few years. New coach Jim O'Brien, though, plans to be the team's law on the court. 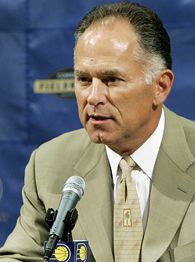 O'Brien was hired Thursday by Indiana and given the task of turning around a team beset by turmoil since the November 2004 brawl between Pacers players and Detroit Pistons fans -- months after the Pacers had finished with the NBA's best record and reached the Eastern Conference finals.

O'Brien said to improve on this season's 35-47 mark and return to the playoffs, the players need to be under control.

"I know that players, whether they will say it or not, really prefer to be in a situation where there is discipline and organization every day," he said.

O'Brien, who has a 182-158 record in five seasons as an NBA head coach, expects to excel immediately. In Boston and Philadelphia, he led teams that had losing records before he took over to the playoffs his first season. He coached Boston to the conference finals in 2001-02.

"This is all about winning," he said. "We would all be disappointed if we're not in the playoffs next year."

Team president Larry Bird said O'Brien will help shape the roster. Bird has said he is willing to trade anyone on the team, including All-Star forward Jermaine O'Neal.

"He'll have a lot of input in that," Bird said. "We like to give a coach the type of players he likes to have. It's important for him to have a big part in it."

The announcement of O'Brien as coach ended a five-week search that began with Rick Carlisle's firing after the Pacers missed the playoffs for the first time in a decade. Carlisle went 181-147 in four seasons with the Pacers, but his time was overshawdowed by player troubles. The Pacers dealt with long suspensions of Ron Artest and Stephen Jackson, the two most prominent players in the 2004 brawl, and ended up trading both.

Jackson and point guard Jamaal Tinsley both face felony charges in separate nightclub fights during the past year -- behavior that Bird has called an embarrassment to the team.

Pacers fans have grown weary of the problems on and off the court and at times have booed the team. O'Brien said his team will play the brand of basketball the fans expect.

"We will practice hard," he said. "Discipline and organization is a cornerstone of any basketball team at any level, and certainly, our guys will know what we want of them."

O'Brien said the Pacers need to add shooters because he likes the 3-point shot. He said he wants the team to get the ball past halfcourt in three seconds, a departure from Carlisle's slower, structured style.

O'Brien said Indiana's recent problems don't matter as much as what the Pacers accomplished the previous decade. Indiana has reached the Eastern Conference finals six times and won the Central Division four times since 1994. They made the NBA Finals in 2000 when they lost to the Los Angeles Lakers and had the league's best record in 2004.

"I know what the Indiana Pacers are all about from the standpoint of their history, their tradition, the way they've gone about things in the past," O'Brien said.

O'Brien had been out of coaching since he was fired by the Philadelphia 76ers following the 2004-05 season and wrote for ESPN.com the past two years. He also coached the Boston Celtics during 2001-04.

"It came down to we needed a guy with experience in here," Bird said of his decision, "a guy who I think I'm going to be on the same page with to do the things necessary to take us to the next level."

Detroit coach Flip Saunders said he was happy to see O'Brien get another coaching opportunity.

"Jim has done a great job in our league, and he's a student of the game and very much a basketball purist," Saunders said. "Anytime you have coaches that have paid their dues, as Jim did, it's nice to see him get another opportunity."