SEATTLE -- Brayden Billbe caught the pass on the block. He
drop-stepped and turned to dunk, just as he usually would. 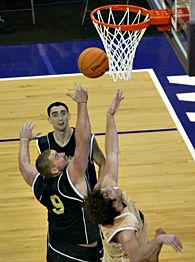 Nope, not this time. Not with the basket a foot higher.

There were a few of those moments on Saturday during an
exhibition basketball game featuring 11-foot rims. Organized by
former NBA assistant Tom Newell -- son of former coach and acclaimed
big-man instructor Pete Newell -- the exhibition surely won't be
remembered for the quality of play, but perhaps for sparking a
change.

"I think this will open the professional league's eyes, where
they may experiment with it, give it a serious look," said Jim
Harrick, the former UCLA coach who was coaching one of the teams.

For the record, Saturday's exhibition ended with a 90-60 victory for the "gold" team. Billbe, a 6-foot-11 center who played at
American University, scored a game-high 20 points and grabbed 14
rebounds.

But the goal for Newell was to examine how the game was
different with the taller rims. Was there more passing and spacing?
Was teamwork at more of a premium and less of a focus on individual
play? Was a challenge presented to the players, all of which had
some college experience, and could they adapt?

The answer seemed to be a resounding yes.

"They represented the game fundamentally as best as I could
have expected," Newell said.

It was sloppy exhibition in the early going, a side effect of
the players spending just a week practicing for it.

By the second quarter the quality improved, and effects of the
taller basket became evident.

Perhaps the biggest impact was on the interior players. No
longer could centers like Billbe catch the ball on the low block,
turn and simply extend their arms and lay the ball over the rim.

With the taller rim, if their positioning was too deep, the shot
angle was nearly impossible. When they turned, an upward shot was
needed. The feel a big man has for their position on the floor was
completely altered.

The taller rim also impacted outside shooting. Players who
weren't square to the basket with their feet set had trouble early
on getting the ball over the front rim. Shots improved later in the
game, but fadeaways and contested attempts often didn't have a
chance.

About a 1,000 fans turned out for the exhibition on the
University of Washington campus, including current Washington coach
Lorenzo Romar and former coach Marv Harshman. Newell's experiment
came from a belief that today's game relies too much on dunking,
3-point shooting and the pure athleticism of players bigger, faster
and stronger than the past.

"On offense, a player still has to use their athleticism, you
just use it in a different way," said Ryan Rourke, who played at
Cornell and now plays in Europe.

Added Andrew Zahn, Adam's brother who plays professionally in
Japan, "Kids are dunking now in eighth grade, freshman
year in high school. You go back to this, the court is a lot more
spread, there are more fundamentals."

Early on, there weren't many fundamentals. The teams combined
for 16 turnovers in the first quarter and finished with 43
combined. Yet, the court opened up, proving lanes for cutting and
passing. Players who usually would hoist 23-foot 3-pointers, passed
up the deep shot to take a couple of dribbles and instead shoot an
18-footer.

Ultimately, Newell was pleased, but realizes any change will
depend on public reception to a game that would be less about
entertainment and more fundamental.

"I can definitely see this happening again," Andrew Zahn said. "To
be involved with the first one is kind of cool."