SAN ANTONIO -- The San Antonio Spurs' black and silver was
joined by another color Sunday -- the gold of the team's fourth
championship trophy in nine seasons.

Lining the banks of San Antonio's famed River Walk, tens of
thousands of fans decked out in the Spurs' colors waited in the
oppressive heat to catch a glimpse of their favorite players and
congratulate the team.

"You guys continue to come out and support us," said Spurs
star Tim Duncan, who has been with the team for all of its title
wins. "Hopefully we can get another one." 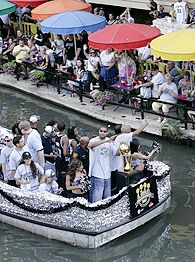 "I'm so happy -- I feel very blessed and it's a privilege to
play with a great team," said Parker, who carried his finals MVP
trophy with him on one of the early barges of the river parade. He
joked that he'd slept with the trophy for the last couple of
nights.

Famed tenor Placido Domingo sang a mariachi-flavored version of
the national anthem and led the crowd in chants of "Go Spurs Go."

Spurs owner Peter Holt, joined by the team's mascot, a coyote,
told the crowd he wants a repeat next year.

Michael Finley and Jacque Vaughn, two of the Spurs players who
won their first championship rings this year, were joined on a boat
by Robert Horry, who has now won seven rings. They said another
title run is a definite possibility.

"I could get used to this," Finley said.

"I say, Why not back-to-back?" Vaughn added.

"You all supported them all year long, we appreciate that," he
said. "We're going to continue to try to do it the right way."

The energy that those guys [the fans] give you, all the emotion, it's beautiful, so it's good for us to have the opportunity to go and see many or most of them and say thanks

Fans said they came several hours ahead of the river parade to
claim a spot. Many fans could be seen dunking their feet in the
brown waters of the San Antonio River in an attempt to cool off.
Others were dining at restaurants along the river to get their own
comfortable front-row seat.

"If you're born in San Antonio, you have to follow the Spurs,"
said James Waclawczyk, 32, who was wearing the No. 20 jersey of his
favorite player, Manu Ginobili. "It's remarkable. To win it once
is awesome -- it takes a lot. But to win it four times, now that is
something to be real impressed with."

The Spurs beat the Cleveland Cavaliers in Ohio for the title on
Thursday. If the Cavs had managed to win just one game, the Spurs
would still be in Cleveland, preparing for Game 5, which would have
been Sunday night. Instead, the Spurs swept the Cavaliers in four
games.

Ginobili rode a boat festooned with the flag of Argentina and
was accompanied by teammate and fellow countryman Fabricio Oberto.

"The energy that those guys [the fans] give you, all the
emotion, it's beautiful, so it's good for us to have the
opportunity to go and see many or most of them and say thanks,"
Ginobili said after the parade.

Police had no estimate for the size of the crowd.

"I think it's great. I think they're a dynasty," said Andres
Palma, who wore the No. 50 jersey of retired San Antonio Spurs star
David Robinson. "I think they can get it next year."

"Timmy [Duncan] is the most important part of our team," said
Palma, 23, who grew up attending Spurs games.

Palma said talking about the team in terms of "our" and "we"
shows how important the Spurs are to the city.

"They're the only team in town," said Diana Espinoza, 48, who
wore silver and black beads around her neck. "They pick up
everybody's pride. We go crazy for them."

The celebration continued at the nearby Alamodome. Easily more
than half of the dome's seats were filled with screaming fans, who
did the wave and watched a replay of Game 4 and a reprise of the
season on the jumbo screens. A larger-than-life replica of the
Larry O'Brien trophy also stood on the arena floor.

As the team rode in on trolleys and walked to the stage, their
four trophies in tow, the crowd let out deafening cheers.

Many of the players said the events were particularly special
because it was also Father's Day.

"To all the fathers who sacrificed dinner tonight, let me hear
it," star defender Bruce Bowen, who earlier this month became a
father for the second time, said to cheers at the Alamodome. "This
is Father's Day, we have fathers here [on the stage] as well. I
want to thank you guys for allowing us to have this beautiful
parade today on Father's Day. Thank you."